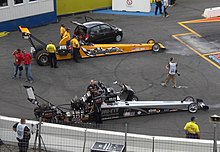 Top Alcohol refers to two different classes in professional drag racing: Top Alcohol Dragster and the Top Alcohol Funny Car. Commonly known as "alky" cars, both are akin in design to the premier Top Fuel classes, but less powerful (about 3,500 bhp (2,600 kW; 3,500 PS)). In both classes, the cars are either supercharged ("blown") engines, burning alcohol (methanol) or can burn nitromethane and be normally aspirated, fuel injected engines.[1] Top Alcohol Dragsters and Funny Cars resemble their nitromethane (Fuel) counterparts, with about half the power of their respective classes. Each car uses a three-speed transmission.[2]

Top Alcohol was devised in the 1970s as a replacement for the Top Gas class, which was similar but burned gasoline. Initially, alcohol dragsters competed against Funny Cars in a category known as Pro Comp, before a separate class, Top Alcohol Funny Car, was created in the 1980s. It was within IHRA's version of this class use of ethanol fuel was pioneered with great success by Mark Thomas, an Ohio farmer who became a five-time champion within that organization. Despite this, ethanol has failed to capture the imagination of racers; the majority opt for more traditional methanol. Today both Top Alcohol Dragster and Top Alcohol Funny Car compete in NHRA drag racing. They are classed not as professional but as sportsman within the USA but in Europe they are classed as a professional category within the FIA Drag Racing Championships. Top Alcohol classes also compete outside of North America, most notably in Australia and Europe. In Europe they are called Top Methanol Dragsters and Top Methanol Funny Cars.