Toyota Gazoo Racing Europe GmbH (TGR-E) is an automotive engineering and motorsport services facility based in Cologne, Germany. It is fully-owned and controlled by Toyota Motor Corporation.[2][3][4]

TGR-E's principal operation is technical development of motorsport vehicles and their competitive entries on behalf of Toyota's Gazoo Racing brand in the FIA's World Endurance Championship (WEC) and World Rally Championship (WRC). The latter is run from a satellite facility in Jyväskylä, Finland, known as Toyota Gazoo Racing WRT.[3][5]

TGR-E was also previously known as Andersson Motorsport and Toyota Motorsport GmbH (TMG), both of which ran Toyota Team Europe (TTE) entries in the WRC.

After 1999, Toyota stopped participating in rallying and sportscar racing in order to prepare for a switch to Formula One (F1) in 2002 using existing TMG resources.[11] From 2002 to 2009, TMG operated its parent company's Formula One team named Panasonic Toyota Racing, starting 139 Grands Prix. In that time they finished on the podium 13 times, earned three pole positions and scored a total of 278.5 points. TMG also provided their Toyota F1 engines to the Jordan Formula One Team in 2005, which was then sold and renamed as Midland F1 Racing in 2006, but continued using Toyota F1 engines until their withdrawal from F1 at the end of 2006. Williams Formula One Team were also TMG's customers for their Toyota F1 engines from 2007 to 2009. On 4 November 2009, Toyota announced their withdrawal from F1.[12]

TMG moved back into sports car racing from 2011 as an engine supplier to Lola Cars, powering Rebellion Racing. In 2012, TMG fully returned to sports car competition entries with the Toyota TS030 Hybrid in the World Endurance Championship.[6]

In 2015, it was announced Toyota would return to the World Rally Championship in 2017 with a Yaris WRC built and prepared by TMG in Cologne.[13] However, several months later it was announced TMG would only be responsible for engine development whilst Tommi Mäkinen Racing Oy (TMR) would develop the car and run the entry from Finland.[14] 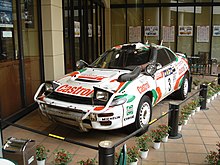 Toyota Team Europe (TTE) began in February 1975. In August of that year, Hannu Mikkola won TTE's first rally, the 1000 Lakes Rally in a Corolla 1600, where the competition used 2.0 L engines.

In September 1987, TTE moved to a larger premises, in which they still reside. It was also the time they revealed their first four wheel drive car, the Toyota Celica GT-Four, driven by Juha Kankkunen and Kenneth Eriksson. Carlos Sainz won the 1990 FIA World Rally Championship Title for Drivers with ST165. The newer GT-Four, ST185, made its debut at the 1992 Rallye Monte Carlo, culminating in Sainz again winning the title in this year. The ST185 also won the WRC Driver's and Manufacturer's Titles in 1993 with Juha Kankkunen, and in 1994 with Didier Auriol.

In 1995 TTE was banned for 12 months[16] from the World Rally Championship (WRC) for cheating by designing an illegal air restrictor[17] on the ST205 that included both a bypass mechanism and spring-loaded devices to conceal it from scrutineers.[18]

In the new World Rally Car era of the WRC, Toyota introduced the Corolla WRC in the 1997 Rally of Finland with a new team name sponsored by the lubricants company, Castrol. The team however, did not enter the manufacturer's championship that year. When they returned to contest the championship in 1998, they did so with the Corolla WRC driven by the crews of Carlos Sainz/Luis Moya and Didier Auriol/Denis Giraudet. They finished the season in second overall in both the Drivers' and Manufacturers' Championships.

In 1999 however, the manufacturers championship was taken, the third in TTE's existence. Toyota withdrew from rallying at the end of the 1999 season in order for Toyota Motorsport GmbH to focus on entries in Formula One and CART.[19] The facility continued to provide services and support to customer teams within the sport.

Toyota Motorsport developed an early prototype Toyota Yaris WRC in preparation for the Toyota Gazoo Racing entry in the 2017 World Rally Championship.[13] Ultimately, TMG only produced the engine whilst Tommi Mäkinen Racing Oy of Finland (TMR) developed a new Yaris WRC around it. In 2021, following the purchase by Toyota, TMR was subsequently renamed to Toyota Gazoo Racing World Rally Team Oy, and it became a branch of TGR-E. The facility in Cologne continued to provide engines for the new hybrid Toyota GR Yaris Rally1 car used in WRC from 2022.[20]

Main article: Toyota in Formula One 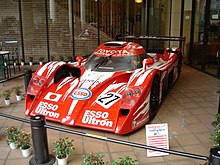 In addition to spearheading Toyota's efforts in the World Rally Championship, the group has also developed and run the Toyota GT-One and Toyota TS030 Hybrid in sports car racing. The GT-One entered the 24 Hours of Le Mans in both 1998 and 1999, and the TS030 Hybrid made its début in 2012.

Introduced in time for Le Mans in 1998, the GT-One first appeared at the official testing days for the race held in May. Three GT-Ones appeared, setting the second, fifth, and tenth best times, easily beating out custom built prototypes which were meant to be the superior class. For the race week itself, all three cars performed admirably in qualifying by continuing their quick pace, qualifying second, seventh, and eighth, being beaten only by their GT class competitor, Mercedes-Benz. For the race itself, the No. 28 GT-One suffered from a high speed accident halfway through the race, taking it out of competition. The two other entrants continued to fight on, both remaining in the top 10. However, within the closing hours, the higher ranked No. 29 GT-One suffered a gearbox failure while in competition for the race win. Thus Toyota was left to take ninth place in the race with the lone No. 27 entry, which ended the race 25 laps behind the winning Porsche 911 GT1.

Their 1999 24 Hours of Le Mans started bitterly after the team was plagued by multiple Michelin tyre failures, the situation becoming somewhat reminiscent of 1998, when the No. 1 and No. 2 car were retired. Martin Brundle in the No. 1 Toyota suffered a puncture at high speed on the Mulsanne Straight, the cars rear suspension was badly damaged and he was unable to get back to the pits. The No. 2 Toyota being driven by Thierry Boutsen was next to go when he suffered a high speed crash under the Dunlop bridge due to a rapid deflation. The car was destroyed and Boutsen suffered injury to his lower back. At the break of dawn, the No. 15 BMW was almost a lap ahead of the No. 3 Toyota which had been quietly cruising around at a steady pace. With this sniff of a win Ukyo Katayama put the foot down in the Toyota and set the fastest lap of the race. He narrowed the gap to less than a minute till again a tyre blowout befell the Toyota team again. Katayama was however able to return to the pits for new tyres and continued. He managed to finish second after a valiant effort placing first in the GT-P class. However, they fell short of the overall victory at Le Mans, which would have made them only the second Japanese manufacturer to get an overall win (Mazda being the first in 1991).

The GT-One raced only once more, a single entrant appearing in the 1999 Le Mans Fuji 1000km. Although the race mostly consisted of Japanese teams, thus leaving out most of the manufacturers that had competed at Le Mans, Toyota still had to compete against rival Nissan, who also entered their R391. In the end the GT-One would fall short once again, finishing second and only one lap behind the winning R391.

The GT-One program was not continued into 2000, Toyota instead turning TTE into leaders of the new Toyota F1 team. This would mark a hiatus in Toyota's attempts at Le Mans until the 2012 season, over a decade later, when Toyota decided to once again contest at the top tier of sports car racing.

In October 2011, Toyota announced its return to Le Mans in 2012 after twelve-year hiatus, with a hybrid-powered Le Mans Prototype, sporting a petrol engine similar to that found in their customer P1 car. The car would be entered in the inaugural season of the FIA World Endurance Championship, though it would miss the first round of the series.

Toyota suffered a severe setback with a crash in late April preventing the debut of the car at the 2012 6 Hours of Spa-Francorchamps, but managed to get two TS030s ready by Le Mans. Unfortunately, neither car finished the race: the #8 car being driven by Anthony Davidson suffered a massive crash with a Ferrari 458 (which also fractured two of Davidson's vertebrae), while the No. 7 car hit the DeltaWing and later retired with an engine failure.

Toyota continued to compete in the rest of the WEC season with a single car, collecting three wins including the 6 Hours of Fuji.

At the 2013 24 Hours of Le Mans Toyota achieved its fourth second-place finish at Le Mans with a revised Toyota TS030 driven by Stéphane Sarrazin, Anthony Davidson and Sébastien Buemi. The sister car finished in fourth several laps down.

Toyota announced in October 2013 that it would continue racing in the World Endurance Championship in 2014. In order to comply with new-for-2014 LMP1 rules, Toyota revealed its new car, the Toyota TS040 Hybrid. The car has a 3.7L V8 normally aspirated petrol engine powering the rear wheels, and regenerative-braking devices at both axles to allow temporary four-wheel drive.

The Toyota TS050 Hybrid was developed for the 2016 FIA World Endurance Championship. It was powered by the H8909 2.4L V6 twin-turbo petrol engine for the first time and a 2.22 kWh battery hybrid system.

The Toyota GR010 Hybrid competed in the 2021 FIA World Endurance Championship under the new Le Mans Hypercar regulations. It has a 3.5L V6 twin-turbo petrol engine connected to the rear wheels, and a battery hybrid system connected to the front wheels.[21]

The company revealed in its annual review[when?] that it has developed an electric racing car based on the Radical sportscar, along with Cologne company e-Wolf. The TMG EV P001 was developed using knowledge Toyota Motorsport gained during its KERS development for F1 and used some of the company's dedicated engine dynos, including an 'EV component test rig'.[citation needed] In August 2011 it set a new lap record for an electric vehicle at the Nürburgring Nordschleife of 7mins 47.794secs.[22] The company says this proves the ability of their technology to be competitive in racing, and that they would like to enter an electric championship.[23]