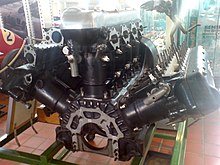 One of the first W engines was the Anzani 3-cylinder, built in 1906, to be used in Anzani motorcycles. It is this W3 engine which also powered the 1909 Blériot XI, the first airplane to fly across the English Channel.[citation needed]

The sole W8 engine to reach production is the Volkswagen Group W8 engine automotive engine, which used a four-bank design and was produced from 2001-2004.[citation needed] 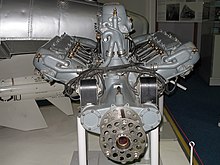 W12 engines with three banks of four cylinders were used by several aircraft engines from 1917 until the 1930s. A three-bank W12 design was also used unsuccessfully by the Life F1 team in the 1990 Formula One season, failing to qualify at every race.[citation needed]

Although less commonly used in automobiles than V12 engines, a W12 petrol engine has been produced by Volkswagen Group since 2001. This four-bank engine—based on two VR6 engines with a common crankshaft—has been used in various cars sold under the Audi, Bentley and Volkswagen brands.[citation needed]

W16 engines are rarely produced, with the notable exception of the Volkswagen Group 8.0 WR16 engine that has been used since 2005. The W16 type of engine can also be found in the Bugatti Veyron, Chiron, Divo and their related models.[9]

The Allison V-3420, manufactured by the Allison Engine Company, is an example of a W24 engine.[citation needed]

The Chrysler A57 multibank, essentially five 250.6 cu in (4.1 L) Chrysler flathead engines driving one output shaft through a gear train, saw action during World War II. Developed in 1941, it would be used inside variants of the M3 Lee and M4 Sherman tanks, all deployed on the Western Front.[10] The A57 is the only example of a five-bank W configuration.[citation needed]