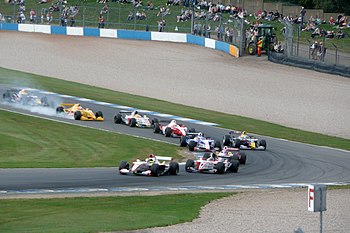 The series came out of the Spanish Formula Renault Championship, which ran from 1991 to 1997. The World Series was founded as Open Fortuna by Nissan in 1998, and was mostly based in Spain, but visited other countries throughout its history, including France, Italy, Portugal and Brazil. The organization was handled by RPM Comunicacion, founded by Jaime Alguersuari Tortajada. The series changed name a number of times, usually adopting the name of its main sponsor, but was also known by other common names such as the unofficial "Formula Nissan".

In its early years, the series used chassis built by Coloni, with a 2.0 L Nissan SR20 engine. The series slotted in between Formula Three and Formula 3000. In 2002, it adopted a new format, with chassis supplied by Dallara and the engine upgraded to the VQ30. The series also became more international, with more than half of the race calendar held outside Spain.

In 2005, Renault left the Super Racing Weekend and started the World Series by Renault and the Formula Renault 3.5 Series, merging both the World Series by Nissan (whose engine contract had finished) and Renault V6 Eurocup. The Dallara chassis was retained, while the Renault V6 was improved to 425 PS. Formula Renault 2.0 Eurocup and the Eurocup Mégane Trophy also joined the series in 2005 to support the main FR3.5 series.

At the end of July 2015, Renault Sport announced it would be withdrawing its backing to the Formula Renault 3.5 from 2016 onwards, handing the control of the series to co-organiser RPM. However, Renault Sport also said it would continue the World Series by Renault with the Renault Sport Trophy and the Formula Renault 2.0 Eurocup.[3] As a result of this, RPM decided to change the series' name to Formula V8 3.5.[4] In December 2016, the series' name was changed again to World Series Formula V8 3.5, giving extra recognition to the championship.[5] On 17 November 2017 was announced that due to lack of entries the series would not take place in 2018 with a possibility of relaunch in the near future.[6]

Starting from 2012 season, the Formula Renault 3.5 Series adopted a new chassis, the Dallara T12, powered by a 3.4 litre V8 engine producing 530 BHP at 9250 rpm developed by Zytek. The cars have 50 more horsepower than previous season and lost 15 kg (33 pounds) of weight. In addition, a Drag Reduction System is used, which operates in a similar way to the one in use in Formula One.[7]

Formula One drivers in the future and/or past

Champions in other categories

World Series by Renault races were broadcast live as part of a package of the combined open-wheel and touring car races on the pan-European Eurosport subscription channel or its sister stations Eurosport2 and British Eurosport. Eurosport is also on-sold to several non-European networks, extending World Series by Renault's international reach as far as South East Asia and Oceania. The races are also carried live by Estonia channel Kanal 12[8] and Spain channel Aragon TV.[9] Abbreviated highlights packages were carried by several other television networks and stations, including the British channels Sky Sports and MotorsTV, the Dutch RTL 7 channel, ESPN Star Sports in Asia, Speed in South America and Esporte Interativo in Brazil.