The 24 Hours of Daytona followed near-continuous inclusion on the World Sportscar Championship. In 1982, the race was dropped as the series attempted to cut costs by both keeping teams in Europe and running shorter race.

The period between 1966 and 1971 was possibly the most successful era of the World Championship, with S (5 L sports cars ) and P (3 L prototypes) classes, and cars such as the Ferrari 512S, Ferrari 330 P4, Ford GT40, Lola T70, Chaparral, Alfa Romeo 33, and Porsche's 908, 917 battled for supremacy on classic circuits such as Sebring, Nürburgring, Spa-Francorchamps, Monza, Targa Florio, and Le Mans where the Ford's won four years in a row, in what is now considered the Golden Age of sports car racing.

In 1982, the FIA attempted to counter a worrying climb in engine output of the Group 5 Special Production Cars by introducing Group C, a new category for closed sports-prototypes (purpose built racing cars) that limited fuel consumption (the theory being that by limiting fuel consumption, engine regulations could be more relaxed). While this change was unwelcome amongst some of the private teams, manufacturer support for the new regulations was immense. Several of the 'old guard' manufacturers returned to the WSC within the next two years, with each marque adding to the diversity of the series. Under the new rules, it was theoretically possible for normally aspirated engines to compete with the (expensive to maintain) forced induction engines that had dominated the series in the '70s and early '80s. In addition, most races ran for either 500 or 1000 km, usually going over three and six hours, respectively, so it was possible to emphasize the "endurance" aspect of the competition as well. Group B cars, which was a GT class, were also allowed to race, but entries in this class were sparse; combined with fatal accidents in rallying where the Group B class saw more popularity, the class (and European GT racing altogether) disappeared from the series, with sports-prototypes dominating the championship. 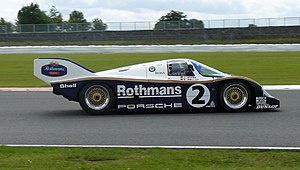 Porsche was the first constructor to join the series, with the 956, but soon several other makes joined the series, including Jaguar Cars, Mercedes-Benz, Nissan, Toyota, Mazda and Aston Martin. As costs increased, a C2 class (originally named C Junior) was created for privateer teams and small manufacturers, with greater limits to fuel consumption. In this lower class, most cars used either the BMW M1 engine or the new Cosworth DFL, but, like in the main class, a variety of solutions were employed by each individual manufacturer. Alba, Tiga, Spice and Ecurie Ecosse were among the most competitive in this class. While the Group C formula had brought manufacturers back to the sport, it was again Porsche - with its 956 & 962 Group C line - that continued their domination of the sport.

The new generation of WSC racing engines, with the stated intent of cost reduction and improved competition, quickly proved highly suspect. Costs rose massively as works teams developed cars capable of qualifying around halfway up a Formula 1 grid, despite weighing some 200 kg more. Manufacturers again abandoned the sportscar series, realising they now had an engine suitable for F1. In particular, Mercedes and Peugeot elected to either concentrate on or move solely to F1. The more exotic engines were unaffordable for teams like Spice and ADA, thus after the manufacturers left the top class of sportscar racing, the series essentially collapsed. A lack of entries meant the 1993 season was cancelled before the first race.

Following the success of the ACO's Intercontinental Le Mans Cup (ILMC), the FIA reached an agreement with the ACO to create a new FIA World Endurance Championship for 2012. The series shares many elements of the ILMC, including the use of the 24 Hours of Le Mans as part of the series schedule. The series continues to utilize the ACO's two primary classes, Le Mans Prototypes and GT Endurance. Championship titles are awarded for constructors and drivers in prototypes, while a constructors cup are awarded in the GTE categories. From 2017 championship titles are awarded also for constructors and drivers in GTE category. [4][5]