A miniature DC brushless axial motor showing the integration with PCB construction techniques. The rotor shown to the right is magnetized axially with alternating polarity.

An axial flux motor (also known as an axial gap motor, or pancake motor) is a geometry of electric motor construction where the gap between the rotor and stator, and therefore the direction of magnetic flux between the two, is aligned parallel with the axis of rotation, rather than radially as with the concentric cylindrical geometry of the more common radial gap motor.[1]

Although this geometry has been used since the first electromagnetic motors were developed, its usage was rare until the widespread availability of strong permanent magnets and the development of brushless DC motors, which could better exploit this geometry's advantages.

Axial geometry can be applied to almost any operating principle (e.g. brushed DC, induction, stepper, reluctance) that can be used in a radial motor. Axial designs allow some topologies that would not be practical in a radial geometry. Even for the same operating principle, application and design considerations make one geometry more suitable than the other. Axial motors are typically shorter and wider than an equivalent radial motor. 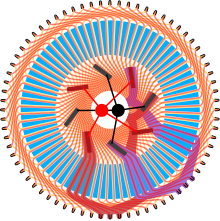 The rotor construction of a Lynch motor, a type of axial brushed DC motor. The brushes and connections are seen in the centre, the alternating permanent magnets (not shown) align with the segments of the rotor in which current is flowing.

Axial motors have been used for low-power applications, since the motor can be built directly upon a printed circuit board (PCB), and can use PCB traces as the stator windings. High-power, brushless axial motors are more recent.[2] One successful brushed DC axial motor is the Lynch motor, where the rotor is almost entirely composed of flat copper strips with small iron cores inserted, allowing power-dense operation.