In physics, the electric displacement field (denoted by D) or electric induction is a vector field that appears in Maxwell's equations. It accounts for the effects of free and bound charge within materials[further explanation needed]. "D" stands for "displacement", as in the related concept of displacement current in dielectrics. In free space, the electric displacement field is equivalent to flux density, a concept that lends understanding of Gauss's law. In the International System of Units (SI), it is expressed in units of coulomb per meter square (C⋅m−2).

In a dielectric material, the presence of an electric field E causes the bound charges in the material (atomic nuclei and their electrons) to slightly separate, inducing a local electric dipole moment. The electric displacement field "D" is defined as

is the vacuum permittivity (also called permittivity of free space), and P is the (macroscopic) density of the permanent and induced electric dipole moments in the material, called the polarization density.

The displacement field satisfies Gauss's law in a dielectric:

is the number of free charges per unit volume. These charges are the ones that have made the volume non-neutral, and they are sometimes referred to as the space charge. This equation says, in effect, that the flux lines of D must begin and end on the free charges. In contrast

is the density of all those charges that are part of a dipole, each of which is neutral. In the example of an insulating dielectric between metal capacitor plates, the only free charges are on the metal plates and dielectric contains only dipoles. If the dielectric is replaced by a doped semiconductor or an ionised gas, etc, then electrons move relative to the ions, and if the system is finite they both contribute to

The density can be rewritten as a function of the polarization P:

The polarization P is defined to be a vector field whose divergence yields the density of bound charges ρb in the material. The electric field satisfies the equation:

Electrostatic forces on ions or electrons in the material are governed by the electric field E in the material via the Lorentz Force. Also, D is not determined exclusively by the free charge. As E has a curl of zero in electrostatic situations, it follows that

where the constant of proportionality

is called the electric susceptibility of the material. Thus

In linear, homogeneous, isotropic media, ε is a constant. However, in linear anisotropic media it is a tensor, and in nonhomogeneous media it is a function of position inside the medium. It may also depend upon the electric field (nonlinear materials) and have a time dependent response. Explicit time dependence can arise if the materials are physically moving or changing in time (e.g. reflections off a moving interface give rise to Doppler shifts). A different form of time dependence can arise in a time-invariant medium, as there can be a time delay between the imposition of the electric field and the resulting polarization of the material. In this case, P is a convolution of the impulse response susceptibility χ and the electric field E. Such a convolution takes on a simpler form in the frequency domain: by Fourier transforming the relationship and applying the convolution theorem, one obtains the following relation for a linear time-invariant medium:

is the frequency of the applied field. The constraint of causality leads to the Kramers–Kronig relations, which place limitations upon the form of the frequency dependence. The phenomenon of a frequency-dependent permittivity is an example of material dispersion. In fact, all physical materials have some material dispersion because they cannot respond instantaneously to applied fields, but for many problems (those concerned with a narrow enough bandwidth) the frequency-dependence of ε can be neglected.

, where σf is the free charge density and the unit normal

points in the direction from medium 2 to medium 1.[1]

Gauss's law was formulated by Carl Friedrich Gauss in 1835, but was not published until 1867,[2] meaning that the formulation and use of D were not earlier than 1835, and probably not earlier than the 1860s.

The earliest known use of the term is from the year 1864, in James Clerk Maxwell's paper A Dynamical Theory of the Electromagnetic Field. Maxwell used calculus to exhibit Michael Faraday's theory, that light is an electromagnetic phenomenon. Maxwell introduced the term D, specific capacity of electric induction, in a form different from the modern and familiar notations.[3]

Example: Displacement field in a capacitor 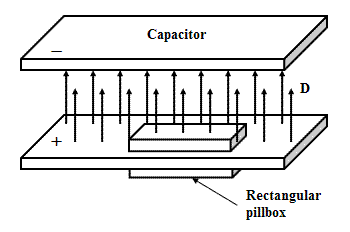 A parallel plate capacitor. Using an imaginary box, it is possible to use Gauss's law to explain the relationship between electric displacement and free charge.

Consider an infinite parallel plate capacitor where the space between the plates is empty or contains a neutral, insulating medium. In this case there are no free charges present except on the metal capacitor plates. Since the flux lines D end on free charges, and there are the same number of uniformly distributed charges of opposite sign on both plates, then the flux lines must all simply traverse the capacitor from one side to the other, and |D| = 0 outside the capacitor. In SI units, the charge density on the plates is equal to the value of the D field between the plates. This follows directly from Gauss's law, by integrating over a small rectangular box straddling one plate of the capacitor:

is the free surface charge density on the positive plate. If the space between the capacitor plates is filled with a linear homogeneous isotropic dielectric with permittivity

, then there is a polarization induced in the medium,

and so the voltage difference between the plates is

where d is their separation.

Introducing the dielectric increases ε by a factor

and either the voltage difference between the plates will be smaller by this factor, or the charge must be higher. The partial cancellation of fields in the dielectric allows a larger amount of free charge to dwell on the two plates of the capacitor per unit of potential drop than would be possible if the plates were separated by vacuum.