Skip to content
Line integral of the electric field
Not to be confused with Voltage.

The electric potential (also called the electric field potential, potential drop, the electrostatic potential) is defined as the amount of work energy needed to move a unit of electric charge from a reference point to the specific point in an electric field. More precisely, it is the energy per unit charge for a test charge that is so small that the disturbance of the field under consideration is negligible. Furthermore, the motion across the field is supposed to proceed with negligible acceleration, so as to avoid the test charge acquiring kinetic energy or producing radiation. By definition, the electric potential at the reference point is zero units. Typically, the reference point is earth or a point at infinity, although any point can be used.

This value can be calculated in either a static (time-invariant) or a dynamic (time-varying) electric field at a specific time with the unit joules per coulomb (J⋅C−1) or volt (V). The electric potential at infinity is assumed to be zero.

It is possible to define the potential of certain force fields so that the potential energy of an object in that field depends only on the position of the object with respect to the field. Two such force fields are the gravitational field and an electric field (in the absence of time-varying magnetic fields). Such fields must affect objects due to the intrinsic properties of the object (e.g., mass or charge) and the position of the object. 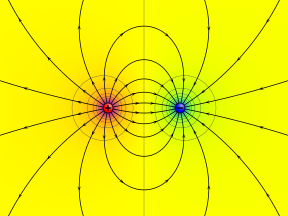 Electric potential in the vicinity of two opposite point charges.

where C is an arbitrary path from some fixed reference point to r. In electrostatics, the Maxwell-Faraday equation reveals that the curl

is zero, making the electric field conservative. Thus, the line integral above does not depend on the specific path C chosen but only on its endpoints, making

well-defined everywhere. The gradient theorem then allows us to write:

This states that the electric field points "downhill" towards lower voltages. By Gauss's law, the potential can also be found to satisfy Poisson's equation:

where ρ is the total charge density and ∇· denotes the divergence.

These equations cannot be used if the curl

, i.e., in the case of a non-conservative electric field (caused by a changing magnetic field; see Maxwell's equations). The generalization of electric potential to this case is described in the section § Generalization to electrodynamics.

Electric potential due to a point charge

The electric potential arising from a point charge Q, at a distance r from the charge is observed to be

where ε0 is the permittivity of vacuum.[4] VE is known as the Coulomb potential.

and the potential of a continuous charge distribution ρ(r) becomes

The equations given above for the electric potential (and all the equations used here) are in the forms required by SI units. In some other (less common) systems of units, such as CGS-Gaussian, many of these equations would be altered.

(due to the Maxwell-Faraday equation).

Instead, one can still define a scalar potential by also including the magnetic vector potential A. In particular, A is defined to satisfy:

where B is the magnetic field. By the fundamental theorem of vector calculus, such an A can always be found, since the divergence of the magnetic field is always zero due to the absence of magnetic monopoles. Now, the quantity

is a conservative field, since the curl of

is canceled by the curl of

according to the Maxwell–Faraday equation. One can therefore write

where V is the scalar potential defined by the conservative field F.

The electrostatic potential is simply the special case of this definition where A is time-invariant. On the other hand, for time-varying fields,

The electrostatic potential could have any constant added to it without affecting the electric field. In electrodynamics, the electric potential has infinitely many degrees of freedom. For any (possibly time-varying or space-varying) scalar field

, we can perform the following gauge transformation to find a new set of potentials that produce exactly the same electric and magnetic fields:[5]

just like in electrostatics. However, in the Lorenz gauge, the electric potential is a retarded potential that propagates at the speed of light, and is the solution to an inhomogeneous wave equation:

The SI derived unit of electric potential is the volt (in honor of Alessandro Volta), which is why a difference in electric potential between two points is known as voltage. Older units are rarely used today. Variants of the centimetre–gram–second system of units included a number of different units for electric potential, including the abvolt and the statvolt.

Inside metals (and other solids and liquids), the energy of an electron is affected not only by the electric potential, but also by the specific atomic environment that it is in. When a voltmeter is connected between two different types of metal, it measures the potential difference corrected for the different atomic environments.[6] The quantity measured by a voltmeter is called electrochemical potential or fermi level, while the pure unadjusted electric potential V is sometimes called Galvani potential

. The terms "voltage" and "electric potential" are a bit ambiguous, however in practice, they can refer to either of these in different contexts.