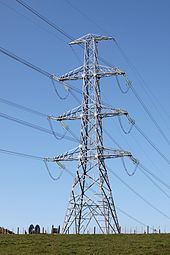 Electric power is transmitted by overhead lines like these, and also through underground high-voltage cables.

Electric power is the rate at which electrical energy is transferred by an electric circuit. The SI unit of power is the watt, one joule per second. Standard prefixes apply to watts as with other SI units: thousands, millions and billions of watts are called kilowatts, megawatts and gigawatts respectively.

Electric power is usually produced by electric generators, but can also be supplied by sources such as electric batteries. It is usually supplied to businesses and homes (as domestic mains electricity) by the electric power industry through an electrical grid.

Electric power can be delivered over long distances by transmission lines and used for applications such as motion, light or heat with high efficiency.[1]

If electric current (conventional current) is forced to flow through the device in the direction from the lower electric potential to the higher, so positive charges move from the negative to the positive terminal, work will be done on the charges, and energy is being converted to electric potential energy from some other type of energy, such as mechanical energy or chemical energy. Devices in which this occurs are called active devices or power sources; such as electric generators and batteries. Some devices can be either a source or a load, depending on the voltage and current through them. For example, a rechargeable battery acts as a source when it provides power to a circuit, but as a load when it is connected to a battery charger and is being recharged.

If conventional current flows through the device in a direction from higher potential (voltage) to lower potential, so positive charge moves from the positive (+) terminal to the negative (−) terminal, work is done by the charges on the device. The potential energy of the charges due to the voltage between the terminals is converted to kinetic energy in the device. These devices are called passive components or loads; they 'consume' electric power from the circuit, converting it to other forms of energy such as mechanical work, heat, light, etc. Examples are electrical appliances, such as light bulbs, electric motors, and electric heaters. In alternating current (AC) circuits the direction of the voltage periodically reverses, but the current always flows from the higher potential to the lower potential side.

Transmission of power through an electric circuit

In the case of resistive (Ohmic, or linear) loads, Joule's law can be combined with Ohm's law (V = I·R) to produce alternative expressions for the amount of power that is dissipated:

where R is the electrical resistance.

In alternating current circuits, energy storage elements such as inductance and capacitance may result in periodic reversals of the direction of energy flow. The portion of energy flow (power) that, averaged over a complete cycle of the AC waveform, results in net transfer of energy in one direction is known as real power (also referred to as active power).[2] The amplitude of that portion of energy flow (power) that results in no net transfer of energy but instead oscillates between the source and load in each cycle due to stored energy, is known as the absolute value of reactive power.[2][3][4] The product of the RMS value of the voltage wave and the RMS value of the current wave is known as apparent power. The real power P in watts consumed by a device is given by

Real and reactive powers can also be calculated directly from the apparent power, when the current and voltage are both sinusoids with a known phase angle θ between them:

The ratio of real power to apparent power is called power factor and is a number always between −1 and 1. Where the currents and voltages have non-sinusoidal forms, power factor is generalized to include the effects of distortion.

Electrical energy flows wherever electric and magnetic fields exist together and fluctuate in the same place. The simplest example of this is in electrical circuits, as the preceding section showed. In the general case, however, the simple equation P = IV may be replaced by a more complex calculation. The closed surface integral of the cross-product of the electric field intensity and magnetic field intensity vectors gives the total instantaneous power (in watts) out of the volume: [5]

The result is a scalar since it is the surface integral of the Poynting vector.

The fundamental principles of much electricity generation were discovered during the 1820s and early 1830s by the British scientist Michael Faraday. His basic method is still used today: electric current is generated by the movement of a loop of wire, or disc of copper between the poles of a magnet.

For electric utilities, it is the first process in the delivery of electricity to consumers. The other processes, electricity transmission, distribution, and electrical energy storage and recovery using pumped-storage methods are normally carried out by the electric power industry.

Electricity is mostly generated at a power station by electromechanical generators, driven by heat engines heated by combustion, geothermal power or nuclear fission. Other generators are driven by the kinetic energy of flowing water and wind. There are many other technologies that are used to generate electricity such as photovoltaic solar panels.

A battery is a device consisting of one or more electrochemical cells that convert stored chemical energy into electrical energy.[8] Since the invention of the first battery (or "voltaic pile") in 1800 by Alessandro Volta and especially since the technically improved Daniell cell in 1836, batteries have become a common power source for many household and industrial applications. According to a 2005 estimate, the worldwide battery industry generates US$48 billion in sales each year,[9] with 6% annual growth. There are two types of batteries: primary batteries (disposable batteries), which are designed to be used once and discarded, and secondary batteries (rechargeable batteries), which are designed to be recharged and used multiple times. Batteries are available in many sizes; from miniature button cells used to power hearing aids and wristwatches to battery banks the size of rooms that provide standby power for telephone exchanges and computer data centers.

The electric power industry provides the production and delivery of power, in sufficient quantities to areas that need electricity, through a grid connection. The grid distributes electrical energy to customers. Electric power is generated by central power stations or by distributed generation. The electric power industry has gradually been trending towards deregulation – with emerging players offering consumers competition to the traditional public utility companies.[10]

Electric power, produced from central generating stations and distributed over an electrical transmission grid, is widely used in industrial, commercial and consumer applications. The per capita electric power consumption of a country correlates with its industrial development. [11] Electric motors power manufacturing machinery and propel subways and railway trains. Electric lighting is the most important form of artificial light. Electrical energy is used directly in processes such as extraction of aluminum from its ores and in production of steel in electric arc furnaces. Reliable electric power is essential to telecommunications and broadcasting. Electric power is used to provide air conditioning in hot climates, and in some places electric power is an economically competitive source of energy for building space heating. Use of electric power for pumping water ranges from individual household wells to irrigation projects and energy storage projects.