The inchworm motor is a device that uses piezoelectric actuators to move a shaft with nanometer precision. 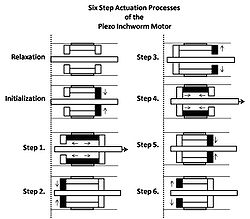 In its simplest form, the inchworm motor uses three piezo-actuators (2 and 3, see Figure 1.) mounted inside a tube (1) and electrified in sequence to grip a shaft (4) which is then moved in a linear direction. Motion of the shaft is due to the extension of the lateral piezo (2) pushing on two clutching piezos (3).

The actuation process of the inchworm motor is a six step cyclical process after the initial relaxation and initialization phase. Initially, all three piezos are relaxed and unextended. To initialize the inchworm motor the clutching piezo closest to the direction of desired motion (which then becomes the forward clutch piezo) is electrified first then the six step cycle begins as follows (see Figure 2.):

Step 1. Extension of the lateral piezo.

Step 4. Relaxation of the lateral piezo.

Electrification of the piezo actuators is accomplished by applying a high bias voltage to the actuators in step according to the "Six Step" process described above. To move long distances the sequence of six steps is repeated many times in rapid succession. Once the motor has moved sufficiently close to the desired final position, the motor may be switched to an optional fine positioning mode. In this mode, the clutches receive constant voltage (one high and the other low), and the lateral piezo voltage is then adjusted to an intermediate value, under continuous feedback control, to obtain the desired final position.

The non-powered behaviour of this piezoelectric motor is one of two options: normally locked or normally free. A normally free type allows free movement when unpowered but can still be locked by applying a voltage.