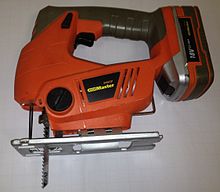 A jigsaw is a saw which uses a reciprocating blade to cut irregular curves, such as stenciled designs, in wood, metal, or other materials.

Jigsaws first emerged in the 19th century[1] and employed a treadle to operate the blade. The modern portable jigsaw was introduced in 1947 by Scintilla AG (later acquired by Bosch).[2]

A jigsaw power tool is made up of an electric motor and a reciprocating saw blade. Jigsaws with sole plates that have a beveling function can cut angles typically up to 45 degrees relative to the normal vertical stroke to make miter joints. In the past, what are now usually called scroll saws were often referred to as jigsaws. Today they are electrically powered and have been largely displaced by portable power jigsaws.

In 1946 Albert Kaufmann, an engineer of Scintilla AG company in Solothurn, Switzerland, replaced the needle on his wife's sewing machine with a saw blade.[3][4] In 1947, after development of Kaufmann's invention, Scintilla started producing jigsaws under name "Lesto jigsaw". In 1954 Scintilla was acquired by Bosch and in 1964 the name "Lesto" was replaced with Bosch.

There are T-shank blades and U-shank blades available in the accessory market. T-Shank blades are the industry-standard professional interface that provides a longer life and a tighter fit from the blade to the tool.

Tooth design is important for the performance of a blade. The tooth spacing, tooth shape, and cutting angle are important in providing speed, cleanliness of cuts, and optimal performance. A side set and ground tooth is designed for clean and fast cuts in wood and plastics. Wavy set and milled teeth will cut most metals as well as plastics. A side set and milled tooth works with fast and rougher cuts in wood and plastics. A ground and taper-ground tooth is for precise, fine and clean cuts in wood. There is also reduced-kerf carbide and diamond grit edges for fast cutting in hard materials.

High-carbon steel (HCS) is used for softer materials such as wood, laminated particle board, and plastics due to its flexibility.

High-speed steel (HSS) is a stronger steel that can cut all types of metals.

Bi-Metal (BIM) blades contain a combination of high-carbon steel and high-speed steel. The combination creates a strong and flexible material that can be used for demanding applications where there is a risk of breakage or when extreme flexibility and versatility is required. Bi-Metal blades have longer lifespans and prolonged job performance compared to other types of blades.

Diamond-grit blades are extremely versatile, as they can cut rough materials such as hard porcelain tile, granite, slate, marble, and other stones due to their finely milled particles. This makes their uses similar to carbide blades, although diamond-grit blades typically last longer.

Control is an issue with jigsaws; the blades are small and weak, with the lower end entirely unsupported. Good cut control requires the presence of blade rollers, which keep the blade aligned just above the sole plate. In addition, heavy-cast sole plate saws are somewhat better than pressed steel for sawing line control. To guide a jigsaw on curved cut, it must be steered (turned) and not forced to move sideways. The use of sharp blades is important as well to get high quality cuts.