Skip to content
Device for converting electrical power to another form
Not to be confused with engine-generator, a device that uses an internal combustion engine to drive an electric generator. 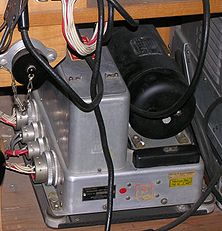 Aircraft radio modulator unit from the Second World War, showing a dynamotor (the black cylinder) which converts the aircraft's 24–28 V DC to 500 V DC for the transmitter. Dübendorf Museum of Military Aviation

While a motor–generator set may consist of distinct motor and generator machines coupled together, a single unit dynamotor (for dynamo–motor) has the motor coils and the generator coils wound around a single rotor; both the motor and generator therefore share the same outer field coils or magnets.[1] Typically the motor coils are driven from a commutator on one end of the shaft, while the generator coils provide output to another commutator on the other end of the shaft. The entire rotor and shaft assembly is smaller, lighter, and cheaper than a pair of machines, and does not require exposed drive shafts.

One use is to eliminate spikes and variations in "dirty power" (power conditioning) or to provide phase matching between different electrical systems.

Another use is to buffer extreme loads on the power system. For example, tokamak fusion devices impose very large peak loads, but relatively low average loads, on the electrical grid. The DIII-D tokamak at General Atomics, the Princeton Large Torus (PLT) at the Princeton Plasma Physics Laboratory, and the Nimrod synchrotron at the Rutherford Appleton Laboratory each used large flywheels on multiple motor–generator rigs to level the load imposed on the electrical system: the motor side slowly accelerated a large flywheel to store energy, which was consumed rapidly during a fusion experiment as the generator side acted as a brake on the flywheel. Similarly, the next generation U.S. Navy aircraft carrier Electromagnetic Aircraft Launch System (EMALS) will use a flywheel motor–generator rig to supply power instantaneously for aircraft launches at greater than the ship's installed generator capacity.

Motor–generators may be used for various conversions including:

Before solid state AC voltage regulation was available or cost effective, motor generator sets were used to provide a variable AC voltage. The DC voltage to the generators armature would be varied manually or electronically to control the output voltage. When used in this fashion, the MG set is equivalent to an isolated variable transformer.

Motor–generators have even been used where the input and output currents are essentially the same. In this case, the mechanical inertia of the M–G set is used to filter out transients in the input power. The output's electric current can be very clean (noise free) and will be able to ride-through brief blackouts and switching transients at the input to the M–G set. This may enable, for example, the flawless cut-over from mains power to AC power provided by a diesel generator set.

The motor–generator set may contain a large flywheel to improve its ride-through; however, consideration must be taken in this application as the motor–generator will require a large amount of current on re-closure, if prior to the pull-out torque[clarification needed] is achieved, resulting in a shut down. The in-rush current during re-closure will depend on many factors, however. As an example, a 250 kVA motor generator operating at 300 ampere of full load current will require 1550 ampere of in-rush current during a re-closure after 5 seconds. This example used a fixed mounted flywheel sized to result in a 1⁄2 Hz per second slew rate. The motor–generator was a vertical type two-bearing machine with oil-bath bearings.

Motors and generators may be coupled by a non-conductive shaft in facilities that need to closely control electromagnetic radiation,[4] or where high isolation from transient surge voltages is required.

Motor–generator sets have been replaced by semiconductor devices for some purposes. In the past, a popular use for MG sets was in elevators. Since accurate speed control of the hoisting machine was required, the impracticality of varying the frequency to a high power AC motor meant that the use of an MG set with a DC hoist motor was a near industry-standard solution. Modern AC variable-frequency drives and compatible motors have increasingly supplanted traditional MG-driven elevator installations, since AC drives are typically more efficient by 50% or more than DC-powered machinery.[citation needed]

Another use for MG sets was in the southern region of British Rail. They were used to convert the 600 V DC – 850 V DC line supply voltage from the third rail into 70 V DC to power the controls of the EMU stock in use. These have since been replaced with solid state converters on new rolling stock.[5]

Similarly, MG sets were used in the PCC streetcar to produce a 36VDC output from the 600VDC traction supply. The low voltage output charges the streetcar's batteries and supplies current for control and auxiliary equipment (including headlights, gong ringers, door motors and electromagnetic track brakes).

On the other hand, in industrial settings where harmonic cancellation, frequency conversion, or line isolation is needed, MG sets remain a popular solution.[citation needed] A useful feature of motor–generators is that they can handle large short-term overloads better than semiconductor devices of the same average load rating. Consider that the thermally current-limited components of a large semiconductor inverter are solid-state switches massing a few grams with a thermal time constant to their heat sinks of likely more than 100 ms, whereas the thermally current limited components of an MG are copper windings massing sometimes hundreds of kilograms which are intrinsically attached to their own large thermal mass. They also have inherently excellent resistance to electrostatic discharge (ESD).

Modern use of the term

From the 2014 season, Formula 1 racing cars will have two of what are described as 'motor-generator units' (MGU)[6] This makes the cars more fuel-efficient by harvesting energy from the turbocharger and under braking. However these are not motor-generators as described here, but are more like dynamotors, single units which can act as either a generator or a motor. They can be used to provide an additional 160 BHP to the wheels to aid acceleration and overtaking, or can be used to spin the turbo to increase boost pressure faster, thereby reducing turbo lag.