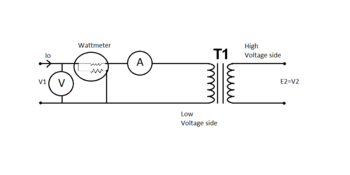 The open-circuit test, or no-load test, is one of the methods used in electrical engineering to determine the no-load impedance in the excitation branch of a transformer. The no load is represented by the open circuit, which is represented on the right side of the figure as the "hole" or incomplete part of the circuit.

If the applied voltage is normal voltage then normal flux will be set up. Since iron loss is a function of applied voltage, normal iron loss will occur. Hence the iron loss is maximum at rated voltage. This maximum iron loss is measured using the wattmeter. Since the impedance of the series winding of the transformer is very small compared to that of the excitation branch, all of the input voltage is dropped across the excitation branch. Thus the wattmeter measures only the iron loss. This test only measures the combined iron losses consisting of the hysteresis loss and the eddy current loss. Although the hysteresis loss is less than the eddy current loss, it is not negligible. The two losses can be separated by driving the transformer from a variable frequency source since the hysteresis loss varies linearly with supply frequency and the eddy current loss varies with the frequency squared.[1]

The parallel shunt component on the equivalent circuit diagram is used to represent the core losses. These core losses come from the change in the direction of the flux and eddy currents. Eddy current losses are caused by currents induced in the iron due to the alternating flux. In contrast to the parallel shunt component, the series component in the circuit diagram represents the winding losses due to the resistance of the coil windings of the transformer.

Current, voltage and power are measured at the primary winding to ascertain the admittance and power-factor angle.

Another method of determining the series impedance of a real transformer is the short-circuit test.

is the wattmeter reading then,

That equation can be rewritten as,

By using the above equations,

The admittance is the inverse of impedance. Therefore,

is the wattmeter reading

is the applied rated voltage

is the no-load current

is the magnetizing component of no-load current

is the core loss component of no-load current

is the exciting impedance

is the exciting admittance