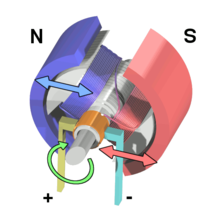 Schematic of a permanent magnet motor

Use in electric vehicles

This type of motor is used in GM's Chevrolet Bolt[1] and Volt, and the rear wheel drive of Tesla's Model 3.[2] Recent dual motor Tesla models use a combination of a permanent magnet motor at the back and traditional induction motor at the front.[3]

It's well known that permanent magnet machines have the benefit of pre-excitation from the magnets, and therefore you have some efficiency benefit for that. Induction machines have perfect flux regulation and therefore you can optimize your efficiency. Both make sense for variable-speed drive single-gear transmission as the drive units of the cars. So, as you know, our Model 3 has a permanent magnet machine now. This is because for the specification of the performance and efficiency, the permanent magnet machine better solved our cost minimization function, and it was optimal for the range and performance target. Quantitatively, the difference is what drives the future of the machine, and it's a trade-off between motor cost, range and battery cost that is determining which technology will be used in the future.[2]

This effect is not unique to permanent magnet motors. An induction motor will also suffer from this effect however in an induction motor the fields from the rotor will decrease as speed increases. A permanent magnet motor generates in its own constant field. This means that as speed increases a voltage is induced linearly to the speed on the stator. This voltage will be negative to the voltage provided to the motor and thus will be a loss to the overall system.[4]

Rare earth production has the consequence of generating waste with elevated radioactivity compared to the natural radioactivity of the ores (waste that is referred to by the US EPA as TENORM, or Technologically Enhanced Naturally Occurring Radioactive Materials). China, the top producer of neodymium, restricted shipments to Japan in 2010 during a controversy over disputed ownership of islands. China imposed strict export quotas on several rare earth metals, saying it wanted to control pollution and preserve resources. The quotas were lifted in 2015. Although neodymium is relatively abundant, global demand for neodymium outstripped production by about 10% in 2017.[3]