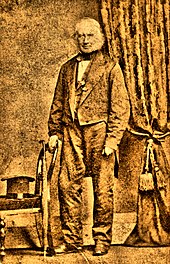 Robert Davidson (1804–1894) was a Scottish inventor who built the first known electric locomotive in 1837. He was a lifelong resident of Aberdeen, northeast Scotland, where he was a prosperous chemist and dyer, amongst other ventures. Davidson was educated at Marischal College, where he studied second and third year classes from 1819-1821,[1] including lectures from Professor Patrick Copland. He got this education in return for being a lab assistant.

In the 1820s, he set up in business close to the Aberdeen-Inverurie Canal, at first supplying yeast, before becoming involved in the manufacture and supply of chemicals.[1]

He became interested in the new electrical technologies of the day. From 1837, he made small electric motors on his own principles.

Davidson staged an exhibition of electrical machinery at Aberdeen, Scotland, and in Edinburgh where it was viewed on February 12, 1842, by the young James Clerk Maxwell.[2]

Later he exhibited at the Egyptian Hall in Piccadilly in London, where he hoped to attract sponsorship for his work.[1] Among the machines shown were his locomotive, an electrically driven lathe and printing press, and an electromagnet capable of lifting 2 tons.[3]

Davidson made a model electric locomotive in 1837. His Galvani of 1842 was a four-wheeled machine, powered by zinc-acid batteries. It was tested on the Edinburgh-Glasgow line in September 1842 and, although found capable of carrying itself at 4 mph, it did not haul any passengers or goods.[4]

He has been described as a forgotten hero and electrical visionary.[3] He could not interest the rail companies; the technology he employed was too expensive.[1]

In 1840, the Aberdeen Banner had predicted that the type of machinery he was producing "will in no distant date supplant steam"; however, it was only when electric locomotives were introduced in the 1890s that the media came to recognize what he had done. He was described as the "oldest living electrician" and The Electrician magazine reported " Robert Davidson was undoubtedly the first to demonstrate the possibility of electrical traction in a practical way".[3]

A working model of his electrical motor can be seen at the Grampian Transport Museum.

After 1843, at home in Aberdeen, he settled down to family life and, for the next fifty years, the running of his business at Canal Road. His earlier invention of a method for large-scale production of yeast, one of the staples of his chemical business,[5] and the manufacture of perfumes were so remunerative that it allowed him to indulge his many interests of astronomy, collecting of fine china, valuable pictures and a large collection of violins.