At the time of the invention, two-phase motor loads also existed and the Scott connection allowed connecting them to newer three-phase supplies with the currents equal on the three phases.[3] This was valuable for getting equal voltage drop and thus feasible regulation of the voltage from the electric generator (the phases cannot be varied separately in a three-phase machine). Nikola Tesla's original polyphase power system was based on simple-to-build two-phase four-wire components. However, as transmission distances increased, the more transmission-line efficient three-phase system became more common. (Three phase power can be transmitted with only three wires, where the two-phase power systems required four wires, two per phase.) Both 2 φ and 3 φ components coexisted for a number of years and the Scott-T transformer connection allowed them to be interconnected. 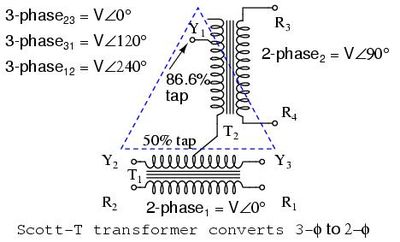 Assuming the desired voltage is the same on the two and three phase sides, the Scott-T transformer connection (shown right) consists of a centre-tapped 1:1 ratio main transformer, T1, and a √3/2(≈86.6%) ratio teaser transformer, T2. The centre-tapped side of T1 is connected between two of the phases on the three-phase side. Its centre tap then connects to one end of the lower turn count side of T2, the other end connects to the remaining phase. The other side of the transformers then connect directly to the two pairs of a two-phase four-wire system.

In modern times people have tried to revive the Scott connection as a way to power single-phase electric railways from three-phase Utility supplies. This will not result in balanced current on the three-phase of being equal. The instantaneous difference in loading on the two sections will be seen as an imbalance in the three-phase supply; there is no way to smooth it out with transformers.[4]

Back to back arrangement

Three-phase to three-phase (also called "T-connected") distribution transformers are seeing increasing applications. The primary must be delta-connected (Δ), but the secondary may be either delta or "wye"-connected (Y), at the customer's option, with X0 providing the neutral for the "wye" case. Taps for either case are usually provided. The customary maximum capacity of such a distribution transformer is 333 kVA (a third of a megawatt at unity power factor).[citation needed]