Skip to content
Type of electromagnet formed by a coil of wire
This article is about the electromagnet. For the device that converts electricity to mechanical energy, see solenoid (engineering). For other uses, see Solenoid (disambiguation).
Not to be confused with Selenoid.

An illustration of a solenoid

A solenoid (/ˈsoʊlənɔɪd/[1]) is a type of electromagnet formed by a helical coil of wire whose length is substantially greater than its diameter,[2] which generates a controlled magnetic field. The coil can produce a uniform magnetic field in a volume of space when an electric current is passed through it. The term solenoid was coined in 1823 by André-Marie Ampère.[3]

The helical coil of a solenoid does not necessarily need to revolve around a straight-line axis; for example, William Sturgeon's electromagnet of 1824 consisted of a solenoid bent into a horseshoe shape (not unlike an arc spring).

Solenoids provide magnetic focusing of electrons in vacuums, notably in television camera tubes such as vidicons and image orthicons. Electrons take helical paths within the magnetic field. These solenoids, focus coils, surround nearly the whole length of the tube.

In engineering, the term "solenoid" refers not only to the electromagnet but to a complete apparatus providing an actuator that converts electrical energy to mechanical energy. 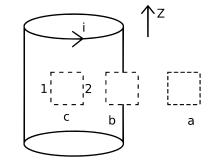 Figure 1: An infinite solenoid with three arbitrary Ampèrian loops labelled a, b, and c. Integrating over path c demonstrates that the magnetic field inside the solenoid must be radially uniform.

An infinite solenoid has infinite length but finite diameter. "Continuous" means that the solenoid is not formed by discrete finite-width coils but by many infinitely thin coils with no space between them; in this abstraction, the solenoid is often viewed as a cylindrical sheet of conductive material.

The magnetic field inside an infinitely long solenoid is homogeneous and its strength neither depends on the distance from the axis nor on the solenoid's cross-sectional area.

This is a derivation of the magnetic flux density around a solenoid that is long enough so that fringe effects can be ignored. In Figure 1, we immediately know that the flux density vector points in the positive z direction inside the solenoid, and in the negative z direction outside the solenoid. We confirm this by applying the right hand grip rule for the field around a wire. If we wrap our right hand around a wire with the thumb pointing in the direction of the current, the curl of the fingers shows how the field behaves. Since we are dealing with a long solenoid, all of the components of the magnetic field not pointing upwards cancel out by symmetry. Outside, a similar cancellation occurs, and the field is only pointing downwards.

Now consider the imaginary loop c that is located inside the solenoid. By Ampère's law, we know that the line integral of B (the magnetic flux density vector) around this loop is zero, since it encloses no electrical currents (it can be also assumed that the circuital electric field passing through the loop is constant under such conditions: a constant or constantly changing current through the solenoid). We have shown above that the field is pointing upwards inside the solenoid, so the horizontal portions of loop c do not contribute anything to the integral. Thus the integral of the up side 1 is equal to the integral of the down side 2. Since we can arbitrarily change the dimensions of the loop and get the same result, the only physical explanation is that the integrands are actually equal, that is, the magnetic field inside the solenoid is radially uniform. Note, though, that nothing prohibits it from varying longitudinally, which in fact, it does. 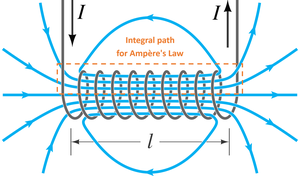 is the magnetic flux density,

is the length of the solenoid,

is the magnetic constant,

the number of turns, and

the current. From this we get

If the solenoid is immersed in a material with relative permeability μr, then the field is increased by that amount:

The inclusion of a ferromagnetic core, such as iron, increases the magnitude of the magnetic flux density in the solenoid and raises the effective permeability of the magnetic path. This is expressed by the formula

where k is the demagnetization factor of the core.[4] 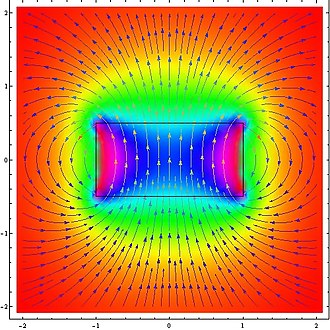 A finite solenoid is a solenoid with finite length. Continuous means that the solenoid is not formed by discrete coils but by a sheet of conductive material. We assume the current is uniformly distributed on the surface of the solenoid, with a surface current density K; in cylindrical coordinates:

The magnetic field can be found using the vector potential, which for a finite solenoid with radius R and length l in cylindrical coordinates

are complete elliptic integrals of the first, second, and third kind.

On the symmetry axis, the radial component vanishes, and the axial field component is

Inside the solenoid, far away from the ends (

), this tends towards the constant value

For the case in which the radius is much larger than the length of the solenoid, the magnetic flux density through the centre of the solenoid (in the z direction, parallel to the solenoid's length, where the coil is centered at z=0) can be estimated as the flux density of a single circular conductor loop:

For cases in which the radius is not large compared to the length, this estimate can be further refined by summating it over N number of wire turnings/coils at different positions along z.

As shown above, the magnetic flux density

within the coil is practically constant and given by

where μ0 is the magnetic constant,

the number of turns,

the length of the coil. Ignoring end effects, the total magnetic flux through the coil is obtained by multiplying the flux density

by the cross-section area

Combining this with the definition of inductance

the inductance of a solenoid follows as

A table of inductance for short solenoids of various diameter to length ratios has been calculated by Dellinger, Whittmore, and Ould.[18]

This, and the inductance of more complicated shapes, can be derived from Maxwell's equations. For rigid air-core coils, inductance is a function of coil geometry and number of turns, and is independent of current.