In the most common case of three-phase systems, the resulting "symmetrical" components are referred to as direct (or positive), inverse (or negative) and zero (or homopolar). The analysis of power system is much simpler in the domain of symmetrical components, because the resulting equations are mutually linearly independent if the circuit itself is balanced.[citation needed] 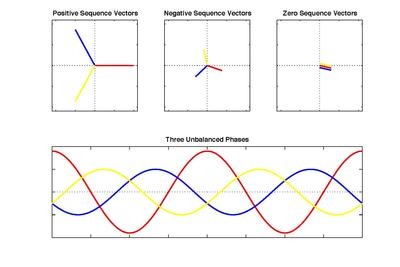 Set of three unbalanced phasors, and the necessary symmetrical components that sum up to the resulting plot at the bottom.

In 1918 Charles Legeyt Fortescue presented a paper[3] which demonstrated that any set of N unbalanced phasors (that is, any such polyphase signal) could be expressed as the sum of N symmetrical sets of balanced phasors, for values of N that are prime. Only a single frequency component is represented by the phasors.

In 1943 Edith Clarke published a textbook giving a method of use of symmetrical components for three-phase systems that greatly simplified calculations over the original Fortescue paper.[4] In a three-phase system, one set of phasors has the same phase sequence as the system under study (positive sequence; say ABC), the second set has the reverse phase sequence (negative sequence; ACB), and in the third set the phasors A, B and C are in phase with each other (zero sequence, the common-mode signal). Essentially, this method converts three unbalanced phases into three independent sources, which makes asymmetric fault analysis more tractable.

By expanding a one-line diagram to show the positive sequence, negative sequence, and zero sequence impedances of generators, transformers and other devices including overhead lines and cables, analysis of such unbalanced conditions as a single line to ground short-circuit fault is greatly simplified. The technique can also be extended to higher order phase systems.

Physically, in a three phase system, a positive sequence set of currents produces a normal rotating field, a negative sequence set produces a field with the opposite rotation, and the zero sequence set produces a field that oscillates but does not rotate between phase windings. Since these effects can be detected physically with sequence filters, the mathematical tool became the basis for the design of protective relays, which used negative-sequence voltages and currents as a reliable indicator of fault conditions. Such relays may be used to trip circuit breakers or take other steps to protect electrical systems.

The analytical technique was adopted and advanced by engineers at General Electric and Westinghouse, and after World War II it became an accepted method for asymmetric fault analysis.

As shown in the figure to the above right, the three sets of symmetrical components (positive, negative, and zero sequence) add up to create the system of three unbalanced phases as pictured in the bottom of the diagram. The imbalance between phases arises because of the difference in magnitude and phase shift between the sets of vectors. Notice that the colors (red, blue, and yellow) of the separate sequence vectors correspond to three different phases (A, B, and C, for example). To arrive at the final plot, the sum of vectors of each phase is calculated. This resulting vector is the effective phasor representation of that particular phase. This process, repeated, produces the phasor for each of the three phases.

Symmetrical components are most commonly used for analysis of three-phase electrical power systems. The voltage or current of a three-phase system at some point can be indicated by three phasors, called the three components of the voltage or the current.

and decomposing the vector into three symmetrical components gives

, which rotates a phasor vector counterclockwise by 120 degrees when multiplied by it:

The zero sequence components have equal magnitude and are in phase with each other, therefore:

and the other sequence components have the same magnitude, but their phase angles differ by 120°. If the original unbalanced set of voltage phasors have positive or abc phase sequence, then:

If instead the original unbalanced set of voltage phasors have negative or acb phase sequence, the following matrix can be similarly derived:

The sequence components are derived from the analysis equation

The above two equations tell how to derive symmetrical components corresponding to an asymmetrical set of three phasors:

Visually, if the original components are symmetrical, sequences 0 and 2 will each form a triangle, summing to zero, and sequence 1 components will sum to a straight line. 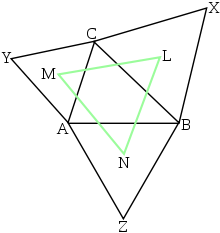 Napoleon's theorem: If the triangles centered on L, M, and N are equilateral, then so is the green triangle.

The synchronous component is in the same manner 3 times the deviation from the "inverse equilateral triangle". The directions of these components are correct for the relevant phase. It seems counter intuitive that this works for all three phases regardless of the side chosen but that is the beauty of this illustration. The graphic is from Napoleon's Theorem, which matches a graphical calculation technique that sometimes appears in older references books.[5]

It can be seen that the transformation matrix above is a discrete Fourier transform, and as such, symmetrical components can be calculated for any poly-phase system.

Contribution of harmonics to symmetrical components in 3-phase power systems

Harmonics often occur in power systems as a consequence of non-linear loads. Each order of harmonics contributes to different sequence components. The fundamental and harmonics of order

will contribute to the positive sequence component. Harmonics of order

will contribute to the negative sequence. Harmonics of order

contribute to the zero sequence.

Note that the rules above are only applicable if the phase values (or distortion) in each phase are exactly the same. Please further note that even harmonics are not common in power systems.

Consequence of the zero sequence component in power systems

One way to prevent large zero sequence currents is to use a delta connection, which appears as an open circuit to zero sequence currents. For this reason, most transmission, and much sub-transmission is implemented using delta. Much distribution is also implemented using delta, although "old work" distribution systems have occasionally been "wyed-up" (converted from delta to wye) so as to increase the line's capacity at a low converted cost, but at the expense of a higher central station protective relay cost.