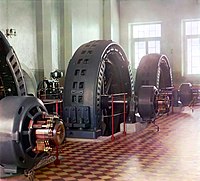 Alternators made in 1909 by Ganz Works in the power generating hall of a Russian hydroelectric station (photograph by Prokudin-Gorsky, 1911).[1] 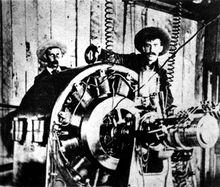 In what is considered the first industrial use of alternating current in 1891, workmen pose with a Westinghouse alternator at the Ames Hydroelectric Generating Plant. This machine was used as a generator producing 3,000-volt, 133-hertz, single-phase AC, and an identical machine 3 miles (4.8 km) away was used as an AC motor.[5][6][7]

Alternating current generating systems were known in simple forms from the discovery of the magnetic induction of electric current in the 1830s. Rotating generators naturally produced alternating current but, since there was little use for it, it was normally converted into direct current via the addition of a commutator in the generator.[8] The early machines were developed by pioneers such as Michael Faraday and Hippolyte Pixii. Faraday developed the "rotating rectangle", whose operation was heteropolar – each active conductor passed successively through regions where the magnetic field was in opposite directions.[9] Lord Kelvin and Sebastian Ferranti also developed early alternators, producing frequencies between 100 and 300 Hz.[citation needed]

The late 1870s saw the introduction of first large scale electrical systems with central generation stations to power Arc lamps, used to light whole streets, factory yards, or the interior of large warehouses. Some, such as Yablochkov arc lamps introduced in 1878, ran better on alternating current, and the development of these early AC generating systems was accompanied by the first use of the word "alternator".[10][8] Supplying the proper amount of voltage from generating stations in these early systems was left up to the engineer's skill in "riding the load".[11] In 1883 the Ganz Works invented the constant voltage generator[12] that could produce a stated output voltage, regardless of the value of the actual load.[13] The introduction of transformers in the mid-1880s led to the widespread use of alternating current and the use of alternators needed to produce it.[14] After 1891, polyphase alternators were introduced to supply currents of multiple differing phases.[15] Later alternators were designed for various alternating current frequencies between sixteen and about one hundred hertz, for use with arc lighting, incandescent lighting and electric motors.[16] Specialized radio frequency alternators like the Alexanderson alternator were developed as longwave radio transmitters around World War 1 and used in a few high power wireless telegraphy stations before vacuum tube transmitters replaced them.[citation needed] 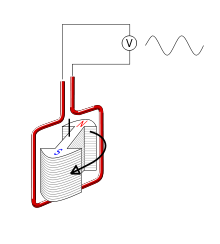 A conductor moving relative to a magnetic field develops an electromotive force (EMF) in it (Faraday's Law). This EMF reverses its polarity when it moves under magnetic poles of opposite polarity. Typically, a rotating magnet, called the rotor turns within a stationary set of conductors wound in coils on an iron core, called the stator. The field cuts across the conductors, generating an induced EMF (electromotive force), as the mechanical input causes the rotor to turn.[citation needed]

The rotor's magnetic field may be produced by permanent magnets, or by a field coil electromagnet. Automotive alternators use a rotor winding which allows control of the alternator's generated voltage by varying the current in the rotor field winding. Permanent magnet machines avoid the loss due to magnetizing current in the rotor, but are restricted in size, due to the cost of the magnet material. Since the permanent magnet field is constant, the terminal voltage varies directly with the speed of the generator. Brushless AC generators are usually larger than those used in automotive applications.[citation needed]

Alternators used in central power stations also control the field current to regulate reactive power and to help stabilize the power system against the effects of momentary faults. Often there are three sets of stator windings, physically offset so that the rotating magnetic field produces a three phase current, displaced by one-third of a period with respect to each other.[17]

In other alternators, wound field coils form an electromagnet to produce the rotating magnetic field.[citation needed]

This method of excitation consists of a smaller direct-current (DC) generator fixed on the same shaft with the alternator. The DC generator generates a small amount of electricity just enough to excite the field coils of the connected alternator to generate electricity. A variation of this system is a type of alternator which uses direct current from a battery for initial excitation upon start-up, after which the alternator becomes self-excited.[19]

Varying the amount of current through the stationary exciter field coils varies the 3-phase output from the exciter. This output is rectified by a rotating rectifier assembly, mounted on the rotor, and the resultant DC supplies the rotating field of the main alternator and hence alternator output. The result of all this is that a small DC exciter current indirectly controls the output of the main alternator.[21]

Many alternators are cooled by ambient air, forced through the enclosure by an attached fan on the same shaft that drives the alternator. In vehicles such as transit buses, a heavy demand on the electrical system may require a large alternator to be oil-cooled.[22] In marine applications water-cooling is also used. Expensive automobiles may use water-cooled alternators to meet high electrical system demands.[citation needed] 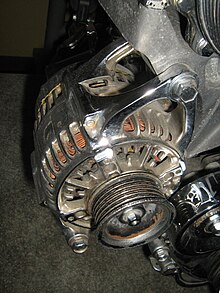 Alternators are used in modern internal combustion engine automobiles to charge the battery and to power the electrical system when its engine is running.[citation needed]

Until the 1960s, automobiles used DC dynamo generators with commutators. With the availability of affordable silicon-diode rectifiers, alternators were used instead.[citation needed]

In later diesel-electric locomotives and diesel electric multiple units, the prime mover turns an alternator which provides electricity for the traction motors (AC or DC).[citation needed]

The traction alternator usually incorporates integral silicon diode rectifiers to provide the traction motors with up to 1,200 volts DC.[citation needed]

The first diesel electric locomotives, and many of those still in service, use DC generators as, before silicon power electronics, it was easier to control the speed of DC traction motors. Most of these had two generators: one to generate the excitation current for a larger main generator.[citation needed]

Optionally, the generator also supplies head-end power (HEP) or power for electric train heating. The HEP option requires a constant engine speed, typically 900 r/min for a 480 V 60 Hz HEP application, even when the locomotive is not moving.[citation needed]

Marine alternators used in yachts are similar to automotive alternators, with appropriate adaptations to the salt-water environment. Marine alternators are designed to be explosion proof (ignition protected) so that brush sparking will not ignite explosive gas mixtures in an engine room environment. They may be 12 or 24 volt depending on the type of system installed. Larger marine diesels may have two or more alternators to cope with the heavy electrical demand of a modern yacht. On single alternator circuits, the power may be split between the engine starting battery and the domestic or house battery (or batteries) by use of a split-charge diode (battery isolator) or a voltage-sensitive relay. Due to the high cost of large house battery banks, Marine alternators generally use external regulators. Multistep regulators control the field current to maximize the charging effectiveness (time to charge) and battery life. Multistep regulators can be programmed for different battery types. Two temperature sensors can be added, one for the battery to adjust charging voltage and an over-temperature sensor on the actual alternator to protect it from overheating.[citation needed]

High frequency alternators of the variable-reluctance type were applied commercially to radio transmission in the low-frequency radio bands. These were used for transmission of Morse code and, experimentally, for transmission of voice and music. In the Alexanderson alternator, both the field winding and armature winding are stationary, and current is induced in the armature by virtue of the changing magnetic reluctance of the rotor (which has no windings or current carrying parts). Such machines were made to produce radio frequency current for radio transmissions, although the efficiency was low.[citation needed]