A tie rod or tie bar (also known as a hanger rod if vertical) is a slender structural unit used as a tie and (in most applications) capable of carrying tensile loads only. It is any rod or bar-shaped structural member designed to prevent the separation of two parts, as in a vehicle. 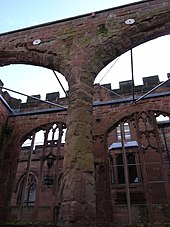 Tie rods and anchor plates in the ruins of Coventry Cathedral

Subtypes and examples of applications

In general, because the ratio of the typical tie rod's length to its cross section is usually very large, it would buckle under the action of compressive forces. The working strength of a tie rod is the product of the allowable working stress and the rod's minimum cross-sectional area.

Tie rods may be connected at the ends in various ways, but it is desirable that the strength of the connection should be at least equal to the strength of the rod. The ends may be threaded and passed through drilled holes or shackles and retained by nuts screwed on the ends. If the ends are threaded right- and left-hand the length between points of loading may be altered. This furnishes a second method for pre-tensioning the rod at will by turning it in the nuts so that the length will be changed. A turnbuckle will accomplish the same purpose. The ends may also be swaged to receive a fitting which is connected to the supports. Another way of making end connections is to forge an eye or hook on the rod.

An infamous structural failure involving tie rods is the Hyatt Regency walkway collapse in Kansas City, Missouri, on July 17, 1981. The hotel had a large atrium with three walkways crossing it suspended from tie rods. Construction errors led to several of the walkways collapsing, killing 114 people and injuring over 200.

Osgood and Graustein used the rectangular hyperbola, its conjugate hyperbola, and conjugate diameters to rationalize tie rods at 15 degree radial spacing, to a square of girders, from its center. The tie-rods to the corners (45°) correspond to the asymptotes, while the pair at 15° and 75° are conjugate, as are the pair at 30° and 60°. According to this model in linear elasticity, the application of a load compressing the square results in a deformation where the tie rods maintain their conjugate relations.[2]