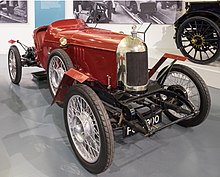 Kimber was born in London on 12 April 1888 to Henry Kimber, a printing engineer and his wife Fanny. After attending Stockport Grammar School he joined his father's company and took an early interest in motorcycles, buying a Rex model, but after an accident on a friend's machine that severely damaged his right leg he took to cars and in 1913 bought a 10 hp Singer.[1] This interest caused him to leave the family firm in 1914 and get a job with Sheffield-Simplex as assistant to the chief designer. During World War I he moved first to AC Cars and then to component supplier EG Wrigley. He made a large personal financial investment in Wrigleys but he lost this when the company lost heavily on a deal with Angus-Sanderson for whom he had styled a radiator.[2] Wrigley had also been a major supplier to Morris Motors Limited and was bought by W R Morris in 1923. Presumably with the help of contacts, Kimber got a job in 1921 as Sales manager with Morris Garages,[3] also a private company owned by Morris — he founded it in 1909 — and the Morris agency in Oxford.

Kimber was killed in the King's Cross railway accident on Sunday 4 February 1945, having boarded the 6:00 p.m. express to Leeds. Shortly after leaving the station and entering Gasworks Tunnel, the locomotive's wheels started slipping on a newly replaced section of rail laid on the rising gradient. In the darkness, the driver failed to realise that the train was no longer moving forward and had started to roll back at a speed of some 6–7 mph (9.7–11.3 km/h). The signalman noticed this and attempted to avert a collision with another train in the station by switching the points to an empty platform but was too late. The rear carriage was derailed, rolled onto its side and was crushed against the steel support of the main signal gantry. The first-class compartment where Kimber had been sitting was demolished; he and one other passenger was killed.

Cecil Kimber married twice, first to Irene (Rene) Hunt with whom he had two daughters, Lisa and Jean, and after Irene died in 1938 to Muriel Dewar. He was elected as President of the Automobile Division of the Institution of Mechanical Engineers.[2]