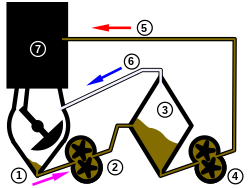 Schematic diagram of a basic dry-sump engine lubrication system. The oil collects in sump (1), is withdrawn continuously by scavenge pump (2) and travels to the oil tank (3), where gases entrained in the oil separate and the oil cools. Gases (6) are returned to the engine sump. Pressure pump (4) forces the de-gassed and cooled oil (5) back to the engine's lubrication points (7).

A dry-sump system is a method to manage the lubricating motor oil in four-stroke and large two-stroke piston driven internal combustion engines. The dry-sump system uses two or more oil pumps and a separate oil reservoir, as opposed to a conventional wet-sump system, which uses only the main sump (U.S.: oil pan) below the engine and a single pump. A dry-sump engine requires a pressure relief valve to regulate negative pressure inside the engine, so internal seals are not inverted.

Dry-sumps are common on larger diesel engines such as those used in ships, as well as gasoline engines used in racing cars, aerobatic aircraft, high-performance personal watercraft and motorcycles. Dry sump lubrication may be chosen for these applications due to increased reliability, oil capacity, reduction of oil starvation under high g-loads and/or other technical or performance reasons. Dry sump systems may not be suitable for all applications due to increased cost, complexity, and/or bulk, among other factors.

Engines are both lubricated and cooled by oil that circulates throughout the engine, feeding various bearings and other moving parts and then draining, via gravity, into the sump at the base of the engine. In the wet-sump system of most production automobile engines, the oil that's not actively circulating is stored in the sump, which is large enough for this purpose. A pump collects oil from the sump and directly circulates it back through the engine. In a dry-sump system, the oil still falls to the base of the engine, but into a much shallower sump, where one or more scavenge pumps draw it away and transfer it to a (usually external) reservoir, where it is both cooled and de-aerated before being recirculated through the engine by a pressure pump. The sump in a dry-sump system is not actually dry; it is still wet from oil draining from the engine. The reservoir is usually tall and narrow and specially designed with internal baffles, and an oil outlet (supply) at the very bottom for uninhibited oil supply even during sloshing.

A dry-sump system requires at least two pumps - one pressure and one scavenge - and sometimes as many as four or five scavenge pumps are used to minimize the amount of oil in the engine. Dry-sump designs frequently mount the pressure pump and scavenge pumps on a common crankshaft, so that one pulley at the front of the system can run as many pumps as the engine design requires. It is common practice to have one scavenge pump per crankcase section, however in the case of inverted engines (aircraft engine) it is necessary to employ separate scavenge pumps for each cylinder bank. Therefore, an inverted V engine would have a minimum of two scavenge pumps and a pressure pump in the pump stack. Although the term "stages" is commonly used to describe multiple scavenge pumps, they typically run in parallel, rather than in series as the term might imply. The pressure stage draws oil from the bottom of the reservoir, and along with an adjustable pressure regulator, supplies the oil under pressure through the filter and into the engine.

Dry sump systems may optionally be designed to keep the engine's crankcase at lower than atmospheric pressure (vacuum), by sealing the crankcase and allowing the scavenge pumps to draw out both oil and gases.[1][2] An equilibrium pressure will be reached when the rate of gases entering the crankcase (blow-by gases past the piston rings, but also air leaks and oil vapor) equals the rate of gas removal from the scavenge pump capacity beyond what's required to remove just the oil. Alternatively, the crankcase may be kept near atmospheric pressure by venting it to the oil reservoir, which in turn is vented into the engine's air intake, or to outside air.

A dry-sump system offers many advantages over a wet-sump. The primary advantages include:[1][3][4]

Dry-sump engines have several disadvantages compared to wet-sump engines, including;[1] [8] [9][10]

Dry-sumps are common on larger diesel engines such as those used for ship propulsion, largely due to increased reliability and serviceability. They are also commonly used in racing cars and aerobatic aircraft, due to problems with g-forces, reliable oil supply, power output and vehicle handling. The Chevrolet Corvette Z06 has a dry sump engine which requires initial oil change after 500 miles.

The dry-sump lubrication is particularly applicable to motorcycles, which tend to be operated more vigorously than other road vehicles. Although motorcycles such as the Honda CB750 (1969) feature a dry-sump engine, modern motorcycles tend to use a wet-sump design. This is understandable with across-the-frame inline four-cylinder engines, since these wide engines must be mounted fairly high in the frame (for ground clearance), so the space below may as well be used for a wet-sump. However, narrower engines can be mounted lower and ideally should use dry-sump lubrication.

Several motorcycle models that use dry-sumps include;