Tasmanian driver John Bowe successfully defended his 1984 Australian Drivers' Championship crown in his Ralt RT4 Ford.[2] Bowe dominated, winning the first four rounds of the series to take a twelve-point victory over Peter Hopwood (Ralt RT4 Ford). Peter Macrow (Cheetah Mk.8 Ford) was a very distant third in the series, only moving into the position when he won the final round at Sandown Park. 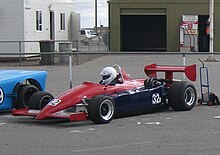 John Bowe won the championship driving a Ralt RT4, similar to the example pictured above

The championship was contested over a five-round series with one race per round.[3]

Championship points were awarded on a 9-6-4-3-2-1 basis to the first six placegetters at each round.[1]