The championship was secured by British driver James Winslow after the penultimate round held at Queensland Raceway. It was Winslow's second championship victory after having won previously in 2008. Winslow, driving for R-Tek Motorsport, won 13 of the 21 races, including five of the seven feature races, over the course of the season, a new record for the Australian Drivers' Championship, eclipsing the 12 wins Rick Kelly took in 2001. Defending champion Chris Gilmour ended the series in second place having won two races. Winslow's teammate Steel Giuliania finished third in the championship with just over half of the points Winslow collected. Jordan Skinner of Team BRM and Hayden Cooper of BF Racing each collected a their debut race victories. The other races wins were collected by John Magro whose partial season campaign with Team BRM ended with winning the Hidden Valley round. Tim Macrow made a brief return to the series he won in 2007, contesting a single round with Astuti Motorsport, winning at Sydney Motorsport Park.

The Dallara F307 Mercedes-Benz of John Magro, who placed sixth in the championship

The championship was contested over a seven-round series,[2] with two Sprint Races and a Feature Race at each round.[3] 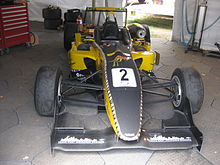 The Dallara F307 Mugen Honda of Matt Sofi, who placed eleventh in the championship

The following teams and drivers contested the 2012 Australian Drivers' Championship. Entries sourced in part from:[4]

Competing cars were nominated into one of three classes:[5]

There were no competitors in the Invitation Class in the 2012 championship.

Championship points were awarded as follows:

Points towards the National Class award were allocated on the same basis as used for the outright championship.[5]