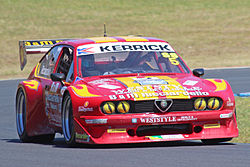 The 2014 Kerrick Sports Sedan Series was contested over five rounds.[2]

The results for each round were determined by the number of points scored by each driver at that round.[1]

Series points were awarded to drivers for their outright finishing positions in each race on the following basis:[1]

Final series standings were as follows:

Race two at Phillip Island was cancelled due to an accident and no points were awarded.[4]

Reference was made in the sporting regulations regarding a Class TA award[1] however results for this were not included with the official published series points table.[2]