The Alfa Romeo 33 (Type 905 and 907) is a small family car produced by the Italian automaker Alfa Romeo between 1983 and 1995. From a mechanical standpoint it was essentially an evolution of its predecessor, the Alfasud, whose floorpan, chassis and drivetrain were carried over—albeit with modifications to the suspension and braking system. The Nissan-based Alfa Romeo Arna was launched shortly after, offering a similarly sized but lower priced car.

The 33 has a unique place in the Alfa Romeo history, as nearly 1 million of these cars were produced. During its 11-year lifespan the 33 saw a light facelift in 1986 and a significant restyle in 1989. The 33 was discontinued in 1994 and replaced by the Alfa Romeo 145 and 146, which used the same boxer engines but built around an entirely new platform based on the Fiat Tipo.

Initially known as the Alfa 33 (Type 905), the 5-door hatchback was launched in 1983 and a station wagon version (initially badged Giardinetta, later badged Sportwagon) was introduced the following year at the same time as a four-wheel drive version of the hatchback. The hatchback was styled by Ermanno Cressoni at the Centro Stile Alfa Romeo,[5] while the station wagon was designed by Pininfarina.

The 33 became renowned for its nimble handling and powerful boxer engines, but also became equally well known for its unreliable electronics and tendencies to rust (a frequent complaint on Italian cars in general at the time).[citation needed] Another issue was its braking and increased unsprung weight—[citation needed]the Alfasud's inboard front disc brakes (mounted on the gearbox) had been moved to the more common outboard discs (mounted on the wheel hubs). The rear discs of the Sud's four-wheel disc arrangement had also been replaced with drums.

The car featured numerous innovations for the company, including an instrument binnacle that moved up and down with the adjustable steering wheel. The UK launch promoted the sleek design.[6] It had a drag coefficient of 0.36.[citation needed]

At launch two models were available, 33 1.3 and 33 1.5 Quadrifoglio Oro.[7] Both engines were SOHC boxers fed by a twin-choke carburettor, carried over from the Alfasud along with its 5-speed gearbox: a 1,350 cc developing 76 PS (56 kW; 75 hp) at 6,000 rpm, and a 1,490 cc developing 85 PS (63 kW; 84 hp) at 5,800 rpm. Unlike on the Alfasud, fifth gear acted like an overdrive gear and top speed was reached in fourth.[7] The luxurious 1.5 Quadrifoglio Oro (Gold Cloverleaf in the UK)[8] was distinguished by a silver grille, two-tone paintwork (metallic paint upper body separated by a brown tape from the dark brown lower body and bumpers) and clear front turn indicator lenses outside; by beige Texalfa leatherette/cloth interior, a woodtone steering wheel and shifter knob inside. Standard equipment included bronze tinted glass, headlight wipers, passenger side wing mirror and a trip computer.

A four-wheel-drive variant, the 33 1.5 4x4, was introduced in at the 1983 Frankfurt Motor Show[9] and put on sale in December.[10] It was assembled by Pininfarina in Grugliasco, Turin.[10] Normally front-wheel drive, the four-wheel drive system could be engaged manually by the driver at any speed, via a handle in front of the gear lever. Like the Quadrifoglio Oro the 4x4 was characterised by two-tone paint, either metallic red or silver separated from a black lower body by a double white pinstripe; the grille matched the body colour. Equipment level was also the same as on the richer Quadrifoglio Oro; ride height was raised in comparison to standard 33s. The 33 1.5 Giardinetta (Estate in the UK), a 5-door estate designed and—like the 4x4 hatchback—assembled by Pininfarina, made its début at the March 1984 Geneva Motor Show.[11] The Giardinetta went on sale in 4x4 guise in June[12] and was joined later in the year by a front-wheel drive model, shown at the Turin Motor Show in November.[13]

Another Quadrifoglio top of the range model, this time the sporting 1.5 Quadrifoglio Verde (Green Cloverleaf in the UK),[14] was put on sale in June 1984.[15] It was powered by a 105 PS (77 kW; 104 hp) version of the 1,490 cc boxer, equipped with double twin-choke carburettors like on the Sprint 1.5 QV coupé; Alfa Romeo claimed a top speed of over 185 km/h (115 mph).[15] The Quadrifoglio Verde could be recognized from its specific grille, additional plastic spoilers under both body-colour bumpers, side skirts, and grey 8-hole alloy wheels with low profile 185/60 HR14 tyres; it was only available in two paint colours—Alfa red or optional metallic silver—highlighted by a light grey stripe in the body side indent.[16] In the cabin there were sport seats in black and grey cloth, a leather covered steering wheel and additional gauges for voltmeter and oil pressure.

In autumn 1986 a mild facelift resulted in a revised range.[19] Exterior alterations were limited to clear instead of amber-coloured indicator lenses, new wheel covers and alloy wheels, the adoption of side skirts by all models, and a redesigned front grille; two-tone paint schemes were discontinued. If outside there were only detail changes, the interior was more deeply revised; starting from a more conventionally designed dashboard and steering wheel, which superseded the innovative moveable instrument binnacle.[19] All 1.5 variants now had the 105 PS engine from the now discontinued 1.5 QV; a TI (Turismo Internazionale, International Touring) trim level was exclusive to the front-wheel drive 1.5 hatchback. Changes were made to the suspension, brakes and gearbox, with closer-spaced ratios.[20]

A new 1,712 cc (104.5 cu in), 118 PS (87 kW; 116 bhp) engine was introduced on the 1.7 Quadrifoglio Verde, which replaced the 1.5 QV. The 1.7 engine was developed from the 1.5 by enlarging bore and stroke; it also used new cylinder heads, incorporating hydraulic tappets.[19] To cope with the increased power the new QV was equipped with vented front brake discs. The 1.7 QV looked close to its predecessor, but had lost the grey mid-body stripe and gained new alloy wheels, front side window wind deflectors, more pronounced side skirts and a rear body-colour spoiler on the boot lid. Inside it featured a leather-covered steering wheel, red carpets, and leatherette-backed sport seats upholstered in a grey/black/red chequered cloth.

On the Italian and some other markets a 1.8 TD turbodiesel variant was also available. Like all diesels fitted to Alfa Romeo passenger cars at the time, it was supplied by VM Motori.[19] In order to fit in an engine bay designed for the particularly short boxer engine, a straight-three layout had to be chosen; a balance shaft helped offset vibrations.[19] Fitted with a KKK turbocharger—but no intercooler—the 1,779 cc (108.6 cu in) diesel produced 54 kW (73 PS; 72 bhp). In all the 1986 models were nine: 1.3, 1.3 S, 1.5 TI, 1.5 4x4, 1.7 Quadrifoglio Verde and 1.8 TD Berlinas (hatchbacks), and 1.5, 1.5 4x4 and 1,8 TD Giardinettas.[19] In the United Kingdom only 1.5 and 1.7 Green Cloverleaf hatchback models were sold, as well as a market-specific 1.7 Sportwagon estate; all three were also available in "Veloce" versions, outfitted by Alfa Romeo GB with a colour-matching Zender body kit.[21][22]

During 1988 the last updates before the major 1990 model revision were phased in. In April the Giardinetta was rechristened Sport Wagon, and became available in 1.3 S, 1.5 4x4, 1.7 Quadrifoglio Verde and 1.8 TD variants.[23] The first fuel injected petrol-engined 33, the 33 1.7 IE, was introduced a few months later, in July.[24] It was the 1,712 cc boxer from the 1.7 QV, fitted with Bosch 3.1 LE Jetronic electronic fuel injection and electronic ignition as well; it developed 110 PS (81 kW; 108 bhp), slightly less than the carburetted version.[24] In some countries it was also marketed in a catalytic converter-equipped variant. The 1.7 IE was distinguished from other models by the Quadrifoglio's side skirts, slate grey painted bumpers, and velour upholstery. At the same time all models got some cosmetic tweaks: the upper bar in the grille was now matched to body colour, there was Glen plaid cloth upholstery on base models, and Quadrifoglio Verdes sported red piping across the front end, where bumper and grille met. 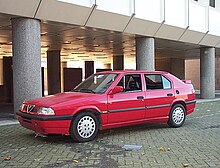 The 33 was given a more extensive facelift in the end of 1989, the Series II or 'Nuova' 33 (Type 907), which went on sale in January 1990. This featured a revised interior, the introduction of fuel injection, the 1.7 litre engine upgraded to include a 137 PS (101 kW; 135 hp) 16 valve version, and a heavily restyled front and rear ends, in line with the new Alfa "family look" established by the flagship 164. Also new four wheel drive version was introduced called the Permanent 4, which was renamed to Q4 starting from 1992. Late production 33s also do not suffer from the rust problems of their ancestors, as their frames are galvanized in the manner Alfa Romeo introduced with the 164.

The wagon was facelifted a little after the saloon, receiving new, darker taillights and a curvier rear bumper. The estate was now sold as Sport Wagon in most markets (no longer "Giardinetta"), including Italy.

Zagato made a tall-bodied three-door prototype, a Compact MPV anticipating the Renault Scénic by over a decade. Called the "Z33 Free Time" this was shown at the 1984 Geneva Motor Show, but the project remained a single prototype. The "Free Time" was no longer than the regular "33" at just under 4 metres (157 in) and retained most of its driving characteristics, but with greatly increased interior space.[28] The tiny six-seater was based on the chassis of the 33 but was visually more related to the Giulietta.[29]

The 33 1.5 Sport Wagon was chosen by Alfa Romeo to test the possibility of creating a hybrid vehicle. Standard 1.5 boxer engine was combined with three-phase asynchronous electric motor (16 hp). The electric motor was coupled with gearbox via a toothed belt and therefore the car could move from the electric motor only, from the petrol engine only or - in the sense of hybrid propulsion - from both. The hybrid car could go 5 km on electric power only, in speeds up to 60 km/h. Changes to the body were minimal and the car weight was increased by 150 kg (110 batteries, 20 engine and 10 for power electronics). 3 vehicles were built.[30]