Anton De Pasquale (born 14 September 1995) is an Australian motor racing driver. He currently drives the No. 11 Ford Mustang GT for Dick Johnson Racing in the Repco Supercars Championship in 2021. He briefly raced in various Formula Renault series in Europe and the Dunlop Super2 Series. 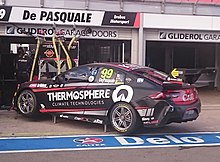 De Pasquale competed in the Australian National Sprint Kart Championship from 2010 to 2011, winning the championship in 2011.

De Pasquale then moved to Europe to compete in the Formula Renault 1.6 NEC Championship winning seven races and gaining three podiums and winning the championship.

He then shifted to the Eurocup Formula Renault 2.0 racing for Koiranen GP for all but 5 races. He scored 4 points and ended the season in 18th place.

De Pasquale then moved back into Australia to compete in the Supercars Dunlop Series racing for Paul Morris Motorsport. He scored one podium and finished in 11th place in the standings.