Australian Formula 2, sometimes abbreviated to AF2 or ANF2, is a "wings and slicks" formula racing category in Australia. The category is one of Australia's oldest, dating back to 1964. The current format of AF2 was introduced in 1978. Brian Shead of Cheetah Racing Cars and Garrie Cooper of Elfin Racing Cars were largely responsible for the development of the format, which was devised to suit the needs of Australian drivers, most of whom had little or no sponsorship and had to bear the costs of racing out of their own pockets.

The class was an amalgamation of the previous Australian Formula 2 and Australian Formula 3 categories, using the same or newly developed cars, but powered by production-based single-cam, 2 valve per cylinder engines, with an engine capacity between 1100 cc and 1600 cc. Popular engines initially included the Toyota 2T, Ford Kent and Holden Gemini. Later on the Volkswagen Golf became the engine of choice due to its lighter weight and greater power levels. Initially the new format proved to be very successful, attracting the largest grids seen in Australian formula racing for years. The manufacture of cars in Australia for the formula flourished. It wasn't uncommon to see cars designed and built by the same person that drove them.

For a brief period when Formula 5000 was in its final death throes, AF2 was arguably (but not officially) Australia's top class of racing car. It had a national championship as well as various state series. AF2 was bumped down from being the number one Australian racing formula with the introduction of the slightly faster but far more expensive Formula Pacific category. Throughout the 1980s AF2 remained an extremely popular and competitive category and the Australian Drivers' Championship was contested with Formula 2 cars in both 1987 and 1988.

In 1999 CAMS introduced 2-litre international Formula Three engines into AF2. The 1600cc class was meant to become the second tier of the formula and then to be discontinued. Despite this 1600cc AF2 remained a popular Formula, perhaps because it was a far cheaper formula than Formula Three and Formula Brabham/Holden/4000.

Since then, the popularity of AF2 has slowly diminished and the series has contracted from being a national series, to one that is contested in New South Wales, although there are plans afoot to also incorporate Victoria.

For 1971, engines with more than two valves per cylinder were banned as were those of less than 1100cc capacity.[5] In the same year the Australian Formula 2 Championship was contested over a series of races for the first time with all rounds run concurrently with those of the 1971 Australian Driver's Championship.[9] The 1974 championship, which enjoyed significant sponsorship from the Van Heusen Shirt Company, was run as a totally stand alone series.[10]

The declining state of the category saw the 1977 championship downgraded to a single race affair and new regulations were announced to take effect in 1978. The engines were to be limited to 1600cc production based units with valve actuation by single overhead camshaft or pushrods.[11] There was no national championship for the new AF2 in this first year but a championship series was reintroduced for 1979.[4]

In an effort to increase fields, an additional class for cars using 2-litre FIA Formula Three engines was incorporated into AF2 for 1999 alongside the existing 1600cc class[17] FIA Formula Three was itself officially adopted in Australia as a separate category the following year[18] but the 2-litre cars remained eligible to compete in AF2 through to 2002.[19] AF2 reverted to a single class 1600cc formula again for 2003.[20]

In the current form of AF2, the engine must be based on one from a mass-produced vehicle. Popular engines include the pushrod hemi headed Toyota 2T, the crossflow Ford Kent, and Holden Gemini, but the most common is the Volkswagen Golf. The Volkswagen Golf is popular due to its lighter weight and greater power levels. AF2 engines must use carburetors for fuel induction, with most running Weber carburetors. AF2 engines are now limited to 8500 rpm although in the past prior to the introduction of rev limiters, engine revs over 10,000 rpm were not uncommon. AF2 engines typically produce in the order of 180 to 200 horsepower (150 kW).

The majority of AF2 cars produced in the late 1970s and 1980s are made from an aluminium monoquue, just as Formula One cars of the era were. Such cars often weigh in under 400 kilograms (880 lb) and the allowable racing weight including the driver is 510 kilograms (1,120 lb). Newer cars such as those made by Reynard and Dallara during the 1990s are made of carbon fibre and are actually heavier than the aluminium cars, although they are also more aerodynamic. The newer cars have a 530 kg racing weight, which helps to equalise their performance with the older cars. AF2 cars feature prominent front and rear wings. The wheels are 13 inches (33 cm) in diameter, with the front wheels typically 9 inches (23 cm) wide and rears typically 11 inches (28 cm) wide. They are configured as an open-wheeler, and are shod with control Dunlop radial slicks.

Like most formula cars, the transmission is at the rear of the car, situated behind both the engine and driver. The most common transmission in aluminium monoque cars is the 5 speed Hewland Mk9 transaxle, but the Hewland Mk8 and stronger FT200 transaxles are also used. Another popular transaxle used in monoque cars, mainly Cheetah Racing cars was manufactured by Holinger Engineering. Like the Hewland Mk8 and Mk9 it is also based on the Volkswagen transaxle. Newer carbon Fibre Dallaras and Reynards typically use transaxle housings manufactured by the car manufacturer, although they sport Hewland internals.

Power levels approaching 200 horsepower (150 kW) combined with a racing weight of only 510 to 530 kg, provide a power-to-weight ratio similar to a V8 Supercar. This allows AF2 cars to accelerate very quickly out of corners and to develop some reasonable top speeds. The approximate 0 to 160 km/h time for an AF2 is 5 seconds. Because the cars are so low, and light and because they have grippy slick tyres and front and rear wings to force them to the ground, the cars are capable of generating very high G forces when cornering and braking.

The engine must be based on that from a mass-produced vehicle, it must have a capacity between 1100 cc and 1600 cc, have a single camshaft operating no more than 2 valves per cylinder and use carburetors for fuel induction. A rev limiter must be fitted to limit maximum engine RPM to 8500.

The bodywork must be of an "open wheel" configuration and there are limitations on both the position and size of the front and rear wings. The car must have a flat floor between the front and rear wheels and the minimum weight of the combined car and driver (racing weight) is either 510 kg or 530 kg depending on the age of the car.

The class uses a "control tyre" manufactured by Dunlop, to ensure both close competition and good tyre life. 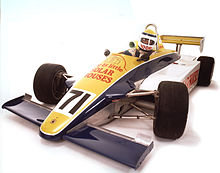