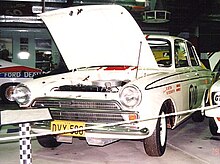 Seton, who suffered from Polio as a child, was particularly noted for his mastery of the Ford Capri in the mid-1970s, registering not only the class wins at Bathurst, but also winning the Sun-7 Rothmans 3-Litre Series at Amaroo Park.

For his 21st Bathurst start in 1983, his co-driver was his son, Glenn Seton[1] making the first of so far 25 Great Race starts and who would go on to become a two time ATCC winner. The pair were leading Class B by over a lap when their Ford Capri blew its engine resulting in a DNF.[1]

His last start, in the 1984 James Hardie 1000 was driving a Group A Ford Mustang paired with longtime co-driver Don Smith. The pair finished 20th outright and 3rd in Group A.[3]

He later became known as an engine builder,[1] firstly with the Peter Jackson Nissan Team building their turbocharged engines from 1986 until 1988 before Glenn formed his own team, Glenn Seton Racing in 1989. Seton joined his son and was chief engine builder of the teams Ford Sierra RS500s until the team switched to racing the V8 Ford Falcon in late 1992. Seton also built a number of customer engines mostly for privateer V8 Supercar teams. He left his son's team after 1995 in order to give himself a new challenge and was immediately snapped up by Longhurst Racing as their chief engine builder from 1996.

Bo Seton no longer competes at the top level, but still competes in some historic touring car races with his Historic Touring Car Mk.I Ford Capri as well as building both Capri and Holden Torana engines for various cars in Group 2 of the Touring Car Masters series, including the engine for so Glenn's Group 1 1973 Ford Falcon XB Hardtop.