The sixth-generation Chevrolet Camaro is an American pony car.[7][8] Produced by automobile manufacturer Chevrolet, it was first introduced to the public on May 16, 2015. Sales started in 2015 for the 2016 model year. The Camaro now utilizes the GM Alpha platform shared with the Cadillac ATS and CTS[9] and features MacPherson struts in front, rather than the former multi-link setup. General Motors claims that 70 percent of architectural components in the new Camaro are unique to the car.[1]

The sixth generation of Camaro saw production return to the United States as the fourth and fifth-generation models had been assembled in Canada.[10][11]

Like its predecessor, the sixth generation of the Camaro is available in coupé and convertible bodystyles. Compared to the previous generation, it is 2.3 in (58 mm) shorter, 0.8 in (20 mm) narrower and 1.1 in (28 mm) shorter in height. With similar equipment and engine, it is also more than 200 lb (91 kg) lighter.

Chevrolet added a base LS (1LS) trim level for the 2017 Camaro. Trim level content for the LS is identical to that of the base 1LT trim, with the exception that the 2.0 L turbocharged inline-4 engine and 6-speed manual transmission would be the only available powertrain options for the LS trim. The LS trim was initially introduced in coupé form, followed later by an LS convertible. The 1LT trim received the 8-speed automatic transmission with shift paddles as standard equipment for 2017.[12]

For China, the car was introduced on August 31, 2016 and sold under the RS trim with the 2 L turbocharged LTG four-cylinder engine and 8-speed automatic gearbox available for 2017 models onwards as standard.[13]

Starting in 2019, the 1LE Package was also available with the four cylinder turbo. It adds similar equipment to the V6 1LE, including the FE3 suspension, Brembo brakes, 20" forged wheels with 245/40 and 275/35 Eagle F1 tires, track cooling, and mechanical limited slip differential. The visual changes are also the same as the V6 1LE's. Car and Driver testing showed the I4 1LE was only 1.6 seconds slower around VIR than the V6.[15] 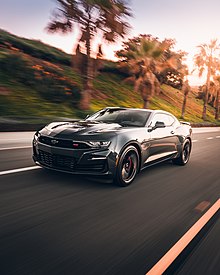 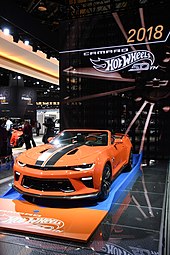 The SS model is equipped with a 6.2L LT1 V8 engine offered both as a 6-speed manual and an 8-speed automatic. Chevrolet reports the SS capable of 455 horsepower and 455 lb.-ft. of torque, performing 0-60 mph (97 km/h) in 4.0 seconds.[19] This model comes in two different trims, the 1SS and 2SS, which are mainly differentiated by their interior features. While the 1SS packs the same power, it lacks the leather heated/ventilated seats of the 2SS. The 2SS includes some other features left out in the 1SS like interior spectrum lighting, heated steering wheel, blind-spot monitoring, Bose audio, and wireless charging. Both trim levels allow the addition of the available 1LE "track package," which adds suede Recaro seats and upgraded performance features detailed elsewhere in this article. In 2019 and subsequent years the new 10L80 10 speed automatic transmission was offered in the SS trim level.

The ZL1 model, which is a high-performance variant of the Camaro SS, was introduced in 2017. It features a lower grille opening for improved cooling, a new front splitter, and a carbon hood insert which removes hot air from the engine compartment. It also features wider front fenders to accommodate wider tires for improved handling, unique rockers, and Magnetic Ride suspension.

Transmission choices are a rev matching six-speed manual or a newly developed 10-speed automatic.[2] The 10-speed 10L90 transmission was developed in collaboration with Ford. General Motors manufactures its own version in its own factory in Romulus, Michigan. A more track-focused version known as the ZL1 1LE features Multimatic spool-valve shocks (similar to the previous generation of the Camaro Z28), a new front splitter, dive planes and a rear wing, and wide Goodyear Eagle F1 Supercar tires. Weight was also reduced by 60 lb (27 kg) as compared to a standard ZL1.[20]

The ZL1, along with the SS, were banned for sale in California and Washington due to their brake pads containing toxic metals and asbestos that were banned in California in 2014 and brake pads containing more than 5% of copper will be prohibited starting in January 2021. GM plans to reintroduce the ZL1 and SS in the two states for the 2022 model year with new brakes that meet state regulations.[22][23][24]

The sixth generation of the Chevrolet Camaro is available with three engine options:

Engines installed on high-performance models include:

General Motors Holden's performance division, Holden Special Vehicles, was engaged in the import and conversion of the Camaro to right-hand-drive and Australian Design Rules, from the second half of 2018.[27] Unlike Holden's previous American import, the Chevrolet badge remained on the converted Camaro. The Holden Suburban was also originally built as RHD, rather than being converted after arriving in Australia.

HSV imported and converted the European Camaro 2SS and ZL1. The manual gearbox, along with the ZL1 model, were made available in 2019.[28] Imports stopped in early 2020 following limited sales,[29] with the possibility remaining of resuming them in the future under the new GMSV brand.[30]

In fall 2018 (for the 2019 model year), the sixth-generation of the Camaro received a mid-cycle redesign, along with the majority of the Chevrolet car lineup (including the Spark, Cruze and Malibu), in which the front end styling was universally panned. Changes for the 2019 model year also included a new third-generation MyLink infotainment system, revised exterior, and interior styling, new alloy wheel designs, the addition of the 1LE Performance Package for the base 2.0 L I4 equipped LT models (the 1LE Performance Package was previously only offered on V6-equipped LT and V8-equipped SS and ZL1 models), the addition of two new exterior colors (Riverside Blue Metallic and Satin Steel Gray Metallic), and a new performance hood for SS models. The SS also dropped the optional 8-speed automatic in favor of the 10-speed automatic. Driver-assistance features were also improved on the 2019 model, including Lane Change Alert with Side Blind Zone Alert.[31] The 2019 Chevrolet Camaro went on sale in the fall of 2018.[32]

Chevrolet also exhibited a 2019 Camaro SS at the 2018 SEMA Show in the new Shock yellow-green exterior color, which became available in early 2019.[33] It also featured a "concept" front end, which unlike the production version of the SS has a body-colored bumper and the Chevy "bow-tie" badge moved to the upper grille.[34]

For the 2020 model year, Chevrolet revised the front-end styling of the Camaro SS, the front bumper is now colored and the Chevy "bow-tie" has been moved to the upper grille. A new entry-level V8 trim called the "Camaro LT1 V8" equipped with a 6.2 L LT1 V8 engine rated at 455 hp (339 kW) was added to the line-up. The V6 model is now equipped with a 10-speed automatic transmission as an option and replaces the previous 8-speed transmission. A new exterior color option called the "Rally Green" was added. The 2020 Camaro went on sale in fall 2019. [35]

The ZL1 is also currently used in the NASCAR Xfinity Series, being driven by the likes of A.J. Allmendinger, and Austin Hill. The ZL1 has been used since the 2018 NASCAR Xfinity Series, and it won in its first race at Daytona. Tyler Reddick beat teammate Elliot Sadler in the closest finish in NASCAR history. The ZL1 has so far won 2 championships, in 2018 and 2019, both won by Tyler Reddick.