Skip to content
Car body style
This article is about the car body style. For other uses, see Coupe (disambiguation).

The term coupé was first applied to horse-drawn carriages for two passengers without rear-facing seats.[3][4] It comes from the French past participle of couper, "cut".[3]

Coupé (French pronunciation: ​[kupe]) is based on the past participle of the French verb couper ("to cut") and thus indicates a car which has been "cut" or made shorter than standard.[3] It was first applied to horse-drawn carriages for two passengers without rear-facing seats.[4] These berlines coupés[5] or carrosses coupés ("clipped carriages") were eventually clipped to coupés.[6] 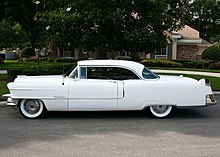 A coupe is a fixed-roof car with a sloping rear roofline and one or two rows of seats. However, there is some debate surrounding whether a coupe must have two doors for passenger egress[10][11][12] or whether cars with four doors can also be considered coupes.[13] This debate has arisen since the early 2000s, when four-door cars such as the Mazda RX-8 and Mercedes-Benz CLS-Class have been marketed as "four-door coupes" or "quad coupes", although the Rover P5 was a much earlier example, with a variant introduced in 1962 having a lower, sleeker roofline marketed as the Rover P5 Coupé.

The 1977 version of International Standard ISO 3833—Road vehicles - Types - Terms and definitions—defines a coupe as having two doors (along with a fixed roof, usually with limited rear volume, at least two seats in at least one row and at least two side windows).[17] On the other hand, the United States Society of Automotive Engineers publication J1100[18][when?] does not specify the number of doors, instead defining a coupe as having a rear interior volume of less than 33 cu ft (934 L).[4][15]

The definition of coupe started to blur when manufacturers began to produce cars with a 2+2 body style (which have a sleek, sloping roofline, two doors, and two functional seats up front, plus two small seats in the back)[19].[20]

Particularly popular in Europe, many cars are designed with coupe styling, but a three-door hatchback/liftback layout to improve practicality, including cars such as the Jaguar E-Type, Datsun 240Z, Toyota Supra, Mazda RX-7, Alfa Romeo Brera,[56] Ford/Mercury Cougar[57] and Volkswagen Scirocco.[58]

Some SUVs or crossovers with sloping rear rooflines are marketed as "coupe crossover SUVs" or "coupe SUVs", even though they have four side doors for passenger egress to the seats and rear hatches for cargo area access.