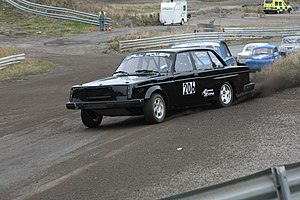 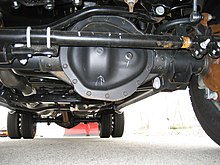 A rare example of front wheel drive was the Opperman Motocart. This slow-speed agricultural and light freight vehicle was a tricycle with the front wheel carrying a large tractor tyre. The wheel was powered by a small single cylinder Douglas engine carried on the front mono fork that formed the steering gear. 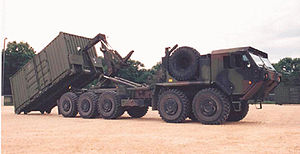 Ten-wheel drive, 10WD or 10×10 is a drivetrain configuration of ten wheels, all of which are driven simultaneously by the engine. Unlike four-wheel drive drivetrains, this configuration is only used in extreme off-road and military uses, in particular heavy haulage and missile carriers. Some severe/extreme duty semi tractors may also have this drive configuration.

Twelve-wheel drive, often shortened to 12WD or 12×12, refers to a twelve-wheeled vehicle with a drivetrain that allows all twelve wheels to receive power from the engine simultaneously. This configuration is typically used in heavy-duty and extreme off-road and military purposes.