Skip to content
British term for a large car 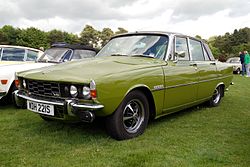 The term was coined in the 1960s to describe cars targeted at successful professionals and middle-to-senior managers.[3] It was used by businesses as an incentive for employees in senior roles and to exploit Britain and Europe's tax schemes as a company owned vehicle. Early executive cars typically offered engines with displacements of 2.0–3.5 L (122–214 cu in), compared with 1.6–2.4 L (98–146 cu in) for an equivalent sized—but less luxurious—"large family car".[citation needed]

Several overseas brands have produced long wheelbase versions of cars specifically for the Chinese market, due to the preference Chinese owners have for being driven by a chauffeur.[9] Examples include the "XF L" version of the 2016 Jaguar XF (X260),[10] the "Li" version of the 2017 BMW 5 Series (G30)[11] and other models from Audi, Mercedes-Benz, and Volvo.

In France, executive cars are known as "Routière", a class of comfortable long-distance cars that first emerged on the French market in the 1930s.

BMW's first large luxury car was the 1936-1941 BMW 326. After a hiatus of 21 years, BMW's next executive car models were the 1962 New Class Sedans. In 1972, the New Class was replaced by the BMW 5 Series, which remains in production today. Over the seven generations of the 5 Series, it has been produced in sedan, wagon, and four-door hatchback body styles.

Toyota has been producing large luxury cars since the 1955 Crown was released. The Crown remains in production today and is currently in its fifteenth generation. In 1991, the Crown-derived Aristo began production, and from 1993 until 2020 were marketed under Toyota's luxury sub-brand as the Lexus GS.[16]

Nissan's longest-running executive car began production in 1959 as the Prince Gloria, which was later renamed the Nissan Gloria, following the merger of Nissan and Prince. The Gloria was produced for 12 generations until 2004. Another Nissan executive car was the 1960 Cedric, which was produced until 2004 (although a taxi/fleet version remained in production until 2015). The Cedric was replaced by the 2004 Fuga, also sold as the Infiniti M from 2003 until 2012, and the Q70 since 2012.

Mitsubishi began producing executive cars in 1964 with the Debonair. The Debonair was replaced in 1999 by the Proudia, which was discontinued in 2001 and then returned from 2012 until 2016 as a rebadged Fuga.

Honda introduced their first executive car, the Legend (sold as the Acura Legend in the United States) in 1985. The Legend was produced until 2012, and then from 2014 until the present.

It is believed that the standard of Korean Executive Cars came from the 3rd generation Hyundai Grandeur model launched in 1998. Previous models, Kia Potentia and Hyundai Grandeur, belonged to the large car position and were shopper-driven, but were relegated to owner-driven from the XG model. Afterward, the launch of Kia Opirus and Daewoo Magnus formed the semi-large car market.

Currently, the semi-large business sedan models sold in the Korean market include Hyundai Grandeur and Kia K8, and the luxury brand is the Genesis G80.

SEAT's first executive car[clarification needed] was the 1963-1973 SEAT 1500, then in 1973, it launched the 132 which was the same FIAT 131 of the era since all cars from the brand were produced under license from FIAT. It was produced until 1982 when it was replaced by the Málaga in 1984, which was the first to be produced in-house entirely, to be replaced afterward with the Toledo, in 1991.

Many years later, in 2009, SEAT launched the Exeo, which is basically a rebadged Audi A4 on the B7 platform, with some minor modifications to the front and rear fascias. Although it was not an E-segment vehicle but a segment D. It remained successful as a company car until 2013. Also, it was used as a police cruiser for the Guardia Civil highway corps. It was available in sedan and station wagon variants. It was the first vehicle from the brand equipped with diesel direct common raíl injection.

Saab's first executive car was the 1984 Saab 9000, which was produced in sedan and liftback body styles. The 9000 was replaced by the Saab 9-5. In 2010 the second generation of the 9-5 switched to a platform shared with various General Motors models until Saab went bankrupt in 2012.

Humber's first executive car was the 1945 Humber Hawk.[17] The Hawk was available with features such as two-tone and metallic paintwork, leather upholstery, wood trim, and a sunroof. Production of the Hawk, along with the similarly sized Humber Super Snipe and Imperial,[18] ceased when the brand was dissolved in 1967.

Ford Europe's first executive car was the 1950 Ford Zephyr. The Zephyr— and related Consul, Zodiac, and Executive models— were produced over four generations until 1972. The 1972 Ford Granada was initially built in the United Kingdom before switching to being imported from Germany in 1976. In 1985, the Ford Scorpio was released, being sold in the U.K. as a Ford Granada until 1994.

In the United States, executive cars are referred to as full-sized cars.

The first executive car produced by a Vietnamese company is the VinFast LUX A2.0, which debuted at the 2018 Paris Motor Show. Production started in 2019 and it achieved success in the Vietnamese domestic car market.[22]