Skip to content
Type of styling to rear car bodywork
For other uses, see Fastback (disambiguation).

A fastback is an automotive styling feature, defined by the rear of the car having a single slope from the roof to the tail.[3][4] The kammback is a type of fastback style.

Some models, such as the Ford Mustang, have been specifically marketed as fastbacks, often to differentiate them from other body styles (e.g. coupe models) in the same model range. The 4-door coupe is a common branding term used today to describe fastback sedans.

A fastback is often defined as having a single slope from the roof to the rear of the vehicle.[5]

This 1974 Leyland P76 can be considered both a fastback (with a single uninterrupted slope from the roofline to the rear) and a liftback (with a tailgate hinged at the roof). 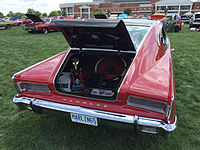 The term "fastback" is not interchangeable with "liftback"; the former describes the shape of the car, and the latter refers to a roof-hinged tailgate that lifts more upwards than rearwards.

More specifically, Road & Track have defined the fastback as

A closed body style, usually a coupe but sometimes a sedan, with a roof sloped gradually in an unbroken line from the windshield to the rear edge of the car. A fastback naturally lends itself to a hatchback configuration and many have it, but not all hatchbacks are fastbacks and vice versa.[6]

In the case of the Ford Mustang, the term "fastback" is used to differentiate against the coupé notchback body style,[7][8] which has a steeper rear window followed by a horizontal trunk lid.

Automobile designers in the 1930s began using elements of aircraft aerodynamics to streamline the boxy-looking vehicles of their day.[9] Such designs, that were ahead of their time when exhibited during the early 1930s, included a droplet-like streamlining of the car's rear; a configuration similar to what would become known as the "fastback" 25 years later.[10] Merriam-Webster first recognized the term "fastback" in 1954,[4] many years before the popularization of the term "hatchback", which entered the dictionary in 1970.[11] Opinions vary as to whether the terms are mutually exclusive.

In North America, the numerous marketing terms for the fastback body-style included "aerosedan", "club coupe", "sedanette" and "torpedo back".[14] Cars included Cadillac's Series 61 and 62 Club Coupes, as well as various other models from General Motors, Ford, and Chrysler. By the early 1940s until 1950, nearly every domestic manufacturer offered at least one fastback body style within their model lineups. In the mid-1960s, the style was revived on many GM and Ford products until the mid-1970s. In Europe, there was a sloping rear on streamlined cars as early as 1945, from which, among other things, the shapes of the Volkswagen Beetle and Porsche 356 are derived.

In Australia, fastbacks (known as "slopers") were introduced in 1935, first designed by General Motors' Holden as one of the available bodies on Oldsmobile, Chevrolet, and Pontiac chassis. The sloper design was added by Richards Body Builders in Australia to Dodge and Plymouth models in 1937; it was subsequently adopted by Ford Australia in 1939 and 1940, as well as a sloper style made on Nash chassis.[15] According to automotive historian G.N. Georgano, "the Slopers were advanced cars for their day".[16]

In Japan, the Toyota AA first adopted the fastback style in 1936. It was strongly influenced by the 1933 DeSoto Airflow. The 1965 Mitsubishi Colt 800 was the first post-war Japanese fastback,[17] and the 1958 Subaru 360 was the first kei fastback. The Prince Skyline 1900 Sprint was developed by Prince Motor Company in 1963, but was never marketed.[18]

A decisive change of course took place in 2004, when the first generation of the Mercedes-Benz CLS-Class was launched. It was called a 4-door coupé, a purely marketing term describing its fastback sedan arrangement, with fastback coupé-profiled bodywork and two doors on each side. The CLS is considered the forerunner of this market segment, but it only reinterpreted the concept—such a layout (although not a true fastback) was briefly used on the 1992-1997 Infiniti J30/Nissan Leopard J Férié.

Fastbacks provide an advantage in developing aerodynamic vehicles with a low drag coefficient.[25] For example, although lacking a wind tunnel, Hudson designed its post-World War II cars to look aerodynamic, and "tests conducted by Nash later found that the Hudson had almost 20% less drag than contemporary notchback sedans".[26]