The Ford Falcon (EF) was a full-size car that was produced by Ford Australia from 1994 to 1996. It was the fourth significantly updated iteration of the fifth generation of the Falcon and also included the Ford Fairmont (EF)—the luxury-oriented.

The Ford EF Falcon was introduced in August 1994.[1] It was a significant facelift of the Ford Falcon (ED),[2] which it replaced. All exterior panels other than the doors were new for the EF, while Fairmont and Fairmont Ghia now had unique frontal styling differentiating them from the Falcon models.[2] An upgraded EF Series II range was introduced in October 1995.[1]

The EF Series also saw the first use of polycarbonate headlight lenses instead of glass, saving weight and gaining shatter resistance. 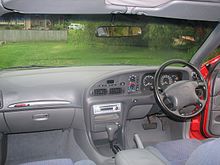 The EF range started with the GLi and Futura, appealing most to fleet buyers and family buyers respectively. GLi models were available in sedan and wagon versions and offered 15-inch wheels, body-coloured front and rear bumpers except insert mouldings, drivers airbag as standard, and the 5-speed manual was standard with 4.0-litre SOHC (single over head cam) inline six-cylinder, while a 5.0-litre V8 and four-speed automatic was optional.[3]

The sport range comprised the XR6, which was available in both sedan and wagon, and the XR8, which was only available in a sedan. Both XR6 and XR8 had bold exterior styling similar to previous XR Falcons, featuring twin headlamps and red or black bumper strips (depending on the body colour) and unique 15-inch alloy wheels.[5]

The XR6 had the same 4.0-litre SOHC (single over head cam) inline six-cylinder as the base models but with Tickford alloy cylinder heads, a Tickford spec cam along with higher pressure valve springs and unique EEC programming to make the most of the changes made to the engine. A press bent 2.5-inch exhaust was also added, a minor upgrade over the standard 2.25-inch system.

Transmissions available were a five-speed manual as standard and a four-speed auto which is electronically controlled and tuned by Tickford.

Luxury models in the EF Falcon range were not branded as Falcon; they were branded either a Ford Fairmont or Ford Fairmont Ghia.[6] The Fairmont was based on the Futura and had all the features of the Futura but added a trip computer, climate control as standard, adjustable steering wheel, Remote Boot Release, Remote Keyless Entry, central locking and 15-inch alloy wheels. The Fairmont Ghia added a nine-speaker audio system, boot mounted 6 CD stacker, subwoofer and Ghia badging. Both the Fairmont and Fairmont Ghia models had chrome accents, differently designed headlights, bonnets and front bar, and were the only model in the EF Falcon range to have a grille (albeit non-functional). four-speed automatic transmission was standard across the Fairmont lineup and had the option of the 4.0-litre SOHC (single over head cam) inline six-cylinder or a 5.0-litre OHV (over head valve) V8. The six-cylinder Ghia version received the motor out of the XR6. The difference in power output is attributed to the quieter exhaust system fitted to the Ghia rather than the higher flowing system of the XR.[7]

The Series II was introduced in October 1995 adding over 1000 new features and eliminated the XR6 wagon from the range. A new front suspension was introduced due to criticism that it was too "nervous" when handling, another major improvement was the standardisation of a passenger airbag (except the GLi but it was a no cost option). Series II EF Falcons are identifiable by revised hubcaps on the GLi model, revised body side rub strips on the Futura, and black B-pillars on the Fairmont Ghia. All EF II Falcons feature a wide-angle convex passenger side door mirror.

When the Series II EF Falcon was released two special editions were made available. A Classic option pack was offered on GLi and Futura sedans and wagons from November 1995 to March 1996 and an Olympic Classic pack was offered on the same models from May to August 1996.[1]