In December 1977 12 special-build XC hardtops were released, all with VINs beginning JG65TE. These were based on the GS hardtop but featured an homologation pack of additional parts that Ford persuaded CAMS was now available as standard on GS hardtops, in order to include those parts on their race cars. The pack included front and rear spoilers, twin electric radiator fans, various body and steering braces for durability and stiffness, and a reverse bonnet scoop that supplied cool air to the engine via a circular hole in the bonnet. This homologation pack would also form the basis of the 30 Option 97 "Bathurst Cobras" the following year. 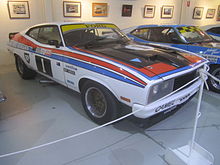