The Ford Falcon (XY) is a full-size car produced by Ford Australia from 1970 to 1972. It was the fourth and last iteration of the second generation of the Falcon and included the Ford Fairmont (XY)—the luxury-oriented version.

The XY Falcon was released in October 1970 replacing the XW Falcon.[3] The XY was a facelift of the XW, featuring a new divided grille and redesigned tail lights.[3] Improvements were made to seating, safety equipment and ride quality.[4]

Futura and Fairmont models, whilst marketed as part of the XY Falcon range, were not officially referred to or badged as Falcons.[6]

A GS Rally Pack was available as an option on the Falcon 500, Futura and Fairmont Sedans and Wagons.[7] 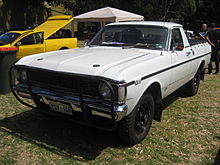 A four-wheel-drive version of the Utility was produced in 1972.[2] It was marketed simply as the Falcon 4-wheel-drive utility [9] and 432 examples were built.[9]