Skip to content
Race car class
"Formula First" redirects here. Not to be confused with Formula One. 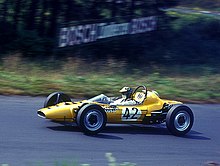 Formula First, raced in the US and New Zealand, employs the same chassis, but with upgraded motor, brakes and steering. Australia’s modern Formula Vee car rules are the definition for formula first in these countries

The class is based on a pre-1963 Volkswagen Beetle, utilizing a collection of the stock parts to form a competitive race car around a purpose-built tube frame and racing tires. The VW engine, transmission, front suspension, brakes and wheels are stock or modified stock parts. The chassis is a tube frame design and the body is fiberglass or carbon fiber. The intention of this class is for the average person to build and maintain the car.

Over the years, the rules have evolved to improve performance, lower cost, or to allow replacement of discontinued parts. In 2003, Grassroots Motorsports presented Formula Vee with the Editors' Choice Award.[1]

Each year, Formula Vee is one of the classes at the SCCA Runoffs, which awards a national championship. While it is primarily a class in the Sports Car Club of America, many other organizations have adopted the Formula Vee as a class.

Particularly notable is Formula First, raced in the US and New Zealand, which employs the same chassis, but with later model Beetle parts, a larger 1,600 cc (98 cu in) motor (New Zealand uses the 1,200 cc [73 cu in] variant) and other upgraded components such as disc brakes rack and pinion steering.[citation needed]

Michael Varacins has the most titles with seven.