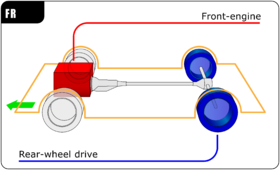 A front-engine, rear-wheel-drive layout (FR) is an automotive design with an engine in front and rear-wheel-drive, connected via a drive shaft. This arrangement, with the engine straddling the front axle, was the traditional automobile layout for most of the 20th century.[1]It is also used in trucks, pickups, and high-floor buses and school buses.

The FR layout was largely displaced in the late 20th century by the front-engine, front-wheel-drive (FF) and all-wheel drive (AWD) layouts. 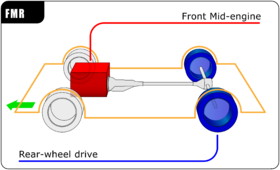 FMR layout, the engine is located behind the front axle

A front mid-engine, rear-wheel-drive layout (FMR) places the engine in the front of the vehicle but behind the front axle, which likewise drives the rear wheels via a driveshaft. Shifting the engine's center of mass rearward aids in front/rear weight distribution and reduces the moment of inertia, both of which improve a vehicle's handling. While the mechanical layout of an FMR is substantially the same as an FR car, the classification of some models of the same vehicle may vary as either FR or FMR depending on the length of the engine (e.g. 4-cylinder vs. 6-cylinder) and its center of mass in relation to the front axle.[citation needed]

FMR cars are often characterized by a long hood and front wheels that are pushed forward to the corners of the vehicle, close to the front bumper. 2+2-style grand tourers often have FMR layouts, as a rear engine does not leave much space for rear seats.