The Surfers Paradise Street Circuit is a temporary street circuit in Surfers Paradise, in Queensland, Australia. The 2.960 km (1.839 mi) beach-side track has several fast sections and two chicanes, having been shortened from an original 4.470 km (2.778 mi) length in 2010. It is the third of three motor racing circuits that have existed in the Gold Coast region, after the Southport Road Circuit (1954–1955) and Surfers Paradise International Raceway (1966–1987). 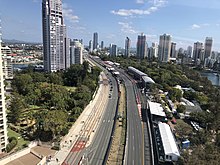 From 2003 to 2007, the touring cars officially shared top billing with the Champcar World Series, and then with the Indy Racing League in 2008. The 2009 race was amended after the demise of A1GP, moving to a 600-kilometre (370 mi) format of four 150-kilometre (93 mi) races, two on Saturday and two on Sunday. From that year on, Supercars are the major category at the event. For 2010 the format was changed to consist of a single 300-kilometre (190 mi) race on each day, with two drivers per car.

As of 30 October 2022, the official race lap records at Surfers Paradise Street Circuit are listed as: [11]