Hidden Valley Raceway is known for its high speeds and fast lap times. It is 2.870 km (1.783 mi) long and has 14 corners, with a main straight 1.1 km (0.68 mi) in length. In order to win, the race car has to flow well through the sweeping bends and also needs top end horse power for the main straight.[2]

In 2021, AIDRA announced the establishment of an annual Australian Drag Racing Championship series, with ASID as one of five venues across the country to host a round in the inaugural season.[3] 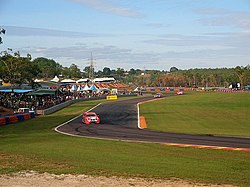 V8 Supercars races have been held at Hidden Valley Raceway since 1998, with the first event occurring in July that year. The event is usually held in late June or early July as the temperature is cooler and it is in the 'dry season'. The event is currently called the CrownBet Darwin Triple Crown, with the 'Triple Crown' awarded to the driver who is fastest in the top ten shootout and wins both races. The 2008 event was voted as the V8 Supercar Event of the Year.[2]

As of June 2022, the official race lap records at Hidden Valley Raceway are listed as:[4]