The Holden 48-215 is a mid-size sedan which was produced by the Australian automaker Holden between November 1948 and October 1953. A coupe utility derivative, coded as the 50-2106 and marketed as the Holden Coupe Utility, was produced from January 1951.

The 48-215 was the first model from General Motors in Australia to bear the Holden name.[2] In mainstream parlance, the official name of "Holden 48-215" was eschewed in favour of the shortened "Holden" designation. Following the replacement of the first Holden, the 48-215 gained the unofficial nickname of Holden FX. This designation was first used in the Drawing Office at GM-H in 1952 as an unofficial means of distinguishing between early 48-215 vehicles with front suspension using lever-action shock absorbers, and those with the new telescopic shock absorber front suspension introduced in 1953 - the term "FX" was pencilled onto a parts list for the new suspension components.[3] The title "FX" later came into use in used car advertisements to describe models with the later suspension, first being used by Melbourne dealer Reg Smith Motors in two advertisements in the 10 February 1960 issue of The Age.[4] Use of the term "FX" gradually spread to cover all 48-215 and 50-2106 vehicles, although the term has never been used by Holden in any official manner.

The design was originally conceived in the United States by Chevrolet,[5] but was not used because it was deemed too small for the U.S. market as it developed after the war. Instead the design became the basis of only the 48-215 model. Its American origins are quite apparent, as it closely resembles Chevrolets of the period that did make it to production, particularly the Fleetline Aerosedan and the second generation Deluxe. Development of the 48-215 began in 1944.

Three prototypes were built by hand in 1946 by American and Australian engineers at the General Motors workshop in Detroit. Months of durability and performance testing were undergone in the US before the three prototypes were shipped to Australia. Prototype number one was first registered (as a Chevrolet) in Victoria as JP-480 on 12 February 1947.[6] It survives as part of the National Museum of Australia collection. Prototypes two and three were registered at the same time as JP-481 and JP-482.

Only two were used for photographic purposes. They were:[6]

In the absence of an established supplier base in Australia for auto-making, new forging facilities had to be set up for producing crankshafts and a new foundry was set up for major castings.[8] In order to hasten the project to production some simplifications were incorporated.[8] There were no direction indicators, there was no provision for heating or demisting, and at the rear there was only a single, centrally positioned, tail lamp.[8] Because of the mild climate in most of the populated areas of the country, it was found possible to save weight and cost by using a relatively small 6-volt 11-plate battery.[8] Interior trim was minimised: weight reduction was pursued "with great vigour" and, in view of the 2,247 lb (1,019 kg) weight in "running trim", a success.[8]

All four Holden colours were represented:[6]

When all departments were satisfied with the car, volume production began. The race was now on to ensure Holden dealers in all states had cars on their showroom floors before unveiling day. Black bodies dominated the early roll-out but GMH made sure that each capital city also received examples of cream, blue, and grey. Ultimately, 68 Holdens were distributed to the capital cities before unveiling day.[9]

On Sunday, 21 November, an Open Day was held to exhibit the entire factory (including the high-security design rooms) and the car itself. But this special preview was not for the public or the dealers—it was for the Fishermans Bend employees and their families (GMH estimated that 12,000 guests attended). There were partly assembled cars at various stages along the assembly line as well as finished cars for the guests to inspect.[9]

The official launch for Victorian dealers was held at the Oriental Hotel in Melbourne on Friday, 26 November.[9] 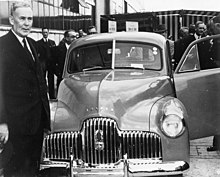 The official unveiling by Prime Minister Ben Chifley commenced at 2:30 pm on Monday, 29 November 1948, in the Fishermans Bend Social Hall. The 400 guests applauded when silver curtains parted to reveal a cream Holden, in a black velvet setting and sparkling under spotlights, as an orchestra played Brahms' Waltz in A-flat. The celebrations at the plant were attended by 1,200 official guests.[9] The Holden was released for sale to the public at Port Melbourne, Victoria. The car was marketed simply as the Holden, without a model name.[10] It had a 132.5 cu in (2,171 cc) cast-iron straight six engine which produced 60 hp (45 kW), connected to a three-speed manual transmission. It managed the 0–60 mph (0–97 km/h) sprint in 18.7 or 27.7 seconds.[5][11] Sources differ. It also had a dust proof body, and a small 37 ft turning circle.[11][12]