The Chevrolet TrailBlazer (also known as Trailblazer) is a mid-size SUV produced by Chevrolet, a division of General Motors. The nameplate was first used in North America from 2001 to 2008; in 2009 it was replaced by the Traverse, as a crossover SUV. In 2011, a production of a newly redesigned version of the Trailblazer for Asia and Brazil began.

The TrailBlazer name was first introduced for the 1999 model year as an upscale trim level of the compact 4-door Chevrolet S-10 Blazer. It offered additional features on top of the previously top-of-the-line Chevrolet S-10 Blazer LT trim level, including an AM/FM stereo with single-disc CD player and optional remote cassette player, OnStar, color-keyed front and rear bumpers, side cladding, a leather-wrapped steering wheel, upgraded alloy wheels, a full-size spare tire and wheel, and upgraded cloth seating surfaces with power front bucket seats. Options such as a Bose premium sound system, leather-trimmed seating surfaces with heated front seats, power sunroof, and gold accents for the exterior emblems were all available for the original TrailBlazer trim package. The TrailBlazer trim was discontinued after 2001, when an all-new TrailBlazer model was introduced as a mid-size SUV. Production of the compact S-10 Blazer overlapped until the 2005 model year.

The first generation 2002–2009 TrailBlazer is based on a truck platform officially known as GMT360, with all models having four-wheel-drive layout as an option with both automatic engagement and the more traditional "2 High", "Automatic", "4 High" and "4 Low" gearing's, except the SS model which features an all-wheel-drive system. The TrailBlazer features an independent front suspension, and a five-link rear suspension. A G80 locking rear differential is available as an option on all models except for the SS which has a G86 LSD as standard. An LTZ trim level had upgraded interior features (leather), upgraded sound system (Bose), and alloy wheels. All TrailBlazers came factory equipped with a detachable towing hitch. 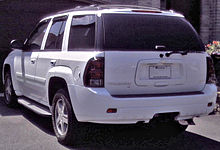 The TrailBlazer was updated in 2005 for the 2006 model year. An updated front fascia on models higher than the base version and new interior trim were included with the refresh. The SS gets trim-specific front and rear fascias plus color-matched side skirts.

The TrailBlazer won the North American Truck of the Year award in 2002. The 4.2 L engine appeared on the Ward's 10 Best Engines list from 2002–2005 with innovative features such as DOHC, variable valve timing on the exhaust camshaft and GM's patented lost-foam casting process.

Throughout its production run, the TrailBlazer was available in several different trim levels:

The SS, introduced for the 2006 model year, was the performance-oriented model of the TrailBlazer, and was based on either the LS or LT trim, depending on the equipment package selected (see the specific models above for standard and optional equipment, which is identical to those trim levels). The differences included unique interior trim, unique polished aluminum-alloy wheels, a unique leather-wrapped steering wheel with an "SS" center emblem, "SS" emblems on the polished wheel center caps, "SS" embroidery for both front bucket seats, unique premium cloth or luxury leather-trimmed seating surfaces, and a 6.0L V8 gasoline engine taken from the Chevrolet Corvette (C6).

The TrailBlazer was also available as a 3-row, 7-passenger EXT version. This vehicle was 410 mm (16 in) longer and had a higher roofline in the rear to allow easier access to the third row of seats. Chevrolet disguised the higher roofline using roof racks. The TrailBlazer EXT platform was given the internal designation GMT370, which was shared with the GMC Envoy XL and Isuzu Ascender LWB; long wheelbase versions of the Oldsmobile Bravada, Buick Rainier and Saab 9-7X were never offered.

Production of the EXT model was handled by the Oklahoma City Assembly plant in Oklahoma City, Oklahoma. The last TrailBlazer EXT rolled off the assembly line on February 20, 2006, because GM had reportedly closed that plant, making 2006 the final year for the TrailBlazer EXT.

The EXT could be identified by its much straighter rear doors (which were not inline with the rear wheel arches), as well as by the circular, metal cap on each of the quarter windows where the opening mechanism attaches, on the 2003 models only. 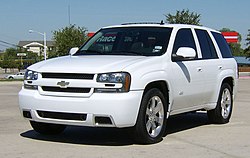 An SS model was introduced for the 2006 model year. This was the first time a production SUV wore the Super Sport badge.[6] The TrailBlazer SS came standard with a 6.0L LS2 V8 engine which produced 395 bhp and 400lb-ft (540 nm) of torque, the same standard engine as the 2005–2007 C6 Corvette, except with different exhaust (more restrictive) and a taller intake manifold to better use the torque characteristics of the engine in the much heavier body. The suspension was stiffened and lowered from the factory, added an air-leveling system in the rear, and rode on 20 in (510 mm) wheels wearing 255 mm (10.0 in) wide tires — all which contributed to much improved handling. All TrailBlazers SS also came from the factory with 4.10 differentials, improving off-the-line acceleration. They were available in both rear-wheel-drive and all-wheel-drive configurations. About 1.7% of total TrailBlazer production had the B4U SS-package.[7]

IIHS tests in early 2009 gave early TrailBlazers a Acceptable[8] overall rating in the frontal offset test while 2005–2009 models got an Acceptable rating. For 2008 models side curtain airbags became standard. At that time, the TrailBlazer received a Marginal overall side impact rating - tested with optional side airbags present. Torso type side airbags were not available then.[9][needs update]

The next generation TrailBlazer was to be built on an upgraded version of the current GMT360 platform called the GMT361. It was scheduled to be launched in spring 2007, but in January 2006, GM decided to refresh the current platform and call the vehicle a GMT360NG. However, in June 2006, GM announced that the GMT360NG program was also canceled due to the large investment. GM decided to keep the current TrailBlazer until the 2009 model year (2008 in Mexico).

The TrailBlazer was replaced by the Traverse in 2009. GM had closed the Moraine plant on December 23, 2008, ending production of all GMT360 products.[15] The last TrailBlazer rolled off the Moraine line on December 16, 2008, a week before the plant's closure. The closing of the last factory that manufactured the trucks was the subject of a 2009 HBO documentary The Last Truck: Closing of a GM Plant.[16]

In 2012, General Motors and Isuzu recalled more than 258,000 SUVs in the U.S. and Canada to fix short-circuits in power window and door lock switches that could cause fires. The recall covered TrailBlazer, Envoy, Rainier, Ascender and 9-7X SUVs from the 2006 and 2007 model years. The SUVs were sold or registered in 20 U.S. states, Washington, D.C., and Canada, where salt and other chemicals are used to clear roads in the winter.[17] 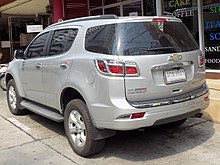 The second generation (stylised as Trailblazer instead of TrailBlazer) was unveiled as a concept at the 2011 Dubai Motor Show, and as a production model at the Bangkok Motor Show on March 21, 2012.[19] As is the case with the original K5 Blazer (1969–1994), Tahoe (since 1995), Suburban (since 1935) and S-10 Blazer (1983–2005), the second-generation Trailblazer is based on a truck frame, namely the second generation Colorado. The bodywork from the A-pillar back is entirely different as it takes the form of an SUV with an enclosed roof, tailgate and three rows of seats. Unlike the Colorado, the rear suspension is a five-link system connected to coil springs but retains the live axle.[20]

The second generation Trailblazer is built in Thailand and in Brazil.[21] It was also sold in some of the Southeast Asian countries, India, South Africa, Saudi Arabia and sold in Australia as the Holden Colorado 7 from 2012 to 2016, and being rebadged as the Trailblazer in 2017. The first-generation Isuzu MU-X also shared the platform with the second-generation Trailblazer.[22]

At its first model update in 2016, the Colorado 7 was renamed to Trailblazer.[24]