The Chevrolet Equinox is a series of crossover SUVs from Chevrolet introduced in 2004 for the 2005 model year. It replaces the North American Chevrolet Tracker and Chevrolet S-10 Blazer. The third-generation Equinox also replaced the first-generation Chevrolet Captiva.[citation needed]

A battery electric, or BEV version called the Equinox EV was introduced in 2022 with sales starting in 2023 for the 2024 model year. It adopts a separate design and underpinnings from the ICE-powered Equinox. 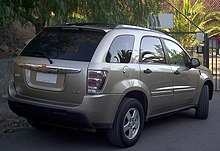 The Chevrolet Equinox was introduced in 2004 for the 2005 model year. Originally, the Equinox was shown at the 2003 North American International Auto Show.

Riding on the GM Theta platform, the unibody is mechanically similar to the Saturn Vue and the Suzuki XL7. However, the Equinox and the Torrent are larger than the Vue, riding on a 112.5 in (2,858 mm) wheelbase, 5.9 in (150 mm) longer than the Vue. Front-wheel drive is standard, with optional all-wheel drive. They are not designed for serious off-roading like the truck-based Chevrolet Tahoe and Chevrolet TrailBlazer.

For the 2006 model year, GM updated the Equinox for the first time, adding GM badges on the front doors, as well as recolouring the dashboard panel from grey to black.

The first generation Equinox and Torrent were produced exclusively at the CAMI Automotive GM/Suzuki joint venture plant in Ingersoll, Ontario, Canada. The 3.4 L LNJ V6 engine is made in China (by Shanghai GM), while the Aisin AF33 transmission is made in Japan. Starting with the 2008 model year, the Equinox Sport and Pontiac GXP were available with a 3.6-liter V6 engine that was made in the United States.

The Chevrolet Equinox was not sold in Mexico during the 2009 model year.

While the Torrent shares its basic body structure and mechanicals with the Equinox, it does have a different front and rear styling.

The Torrent was discontinued after the 2009 model year as part of the discontinuation of the Pontiac brand, with the last one rolling off the assembly line on September 2, 2009. A Buick Theta crossover SUV was to be made, effectively taking place of the Pontiac Torrent.[2] Instead, GM replaced the Torrent with the GMC Terrain, which shares the Theta platform with the second generation Equinox.

For the 2008 and 2009 model years, GM offered different versions of the Equinox and Torrent; called Sport/SS and GXP, respectively. Featuring a 3.6-liter LY7 DOHC V6 engine and a 6-speed automatic transmission (with Manual Tap Up/Down shifting capability). This larger and more powerful (264 hp (197 kW; 268 PS) or 40% increase) engine allowed acceleration from 0 to 60 mph (0 to 97 km/h) in under seven seconds.

These models also received a 1 in (25 mm) lowered ride height with a performance-tuned suspension and unique front and rear body kits. The lower stance is accented by the 18-inch 5-spoke chrome wheels and the absence of the roof rack, giving them a smoother design flow compared to the standard models. The GXP had twin hood scoops, hydraulic power-assisted steering (as opposed to the electric power-assisted standard Torrent), improved interior trim with unique gauges, and a dual chrome-tipped exhaust. 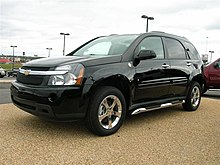 For the 2008 model year, in tribute to the Vancouver 2010 Winter Olympic Games, the Equinox and Torrent each received a special edition; the Team Canada Edition and the Podium Edition, respectively. This package added chrome-clad wheels, sunroof, premium sound system, and special badging.[4] These trims were sold only in Canada.

The second generation Equinox was announced by GM on December 21, 2008, and debuted at the 2009 North American International Auto Show in Detroit.[7][8] The 2010 Equinox went on sale in June 2009. It is built on a stiffened version of the same "Theta" platform used in the previous model. The second generation Equinox was built with a pair of upgraded gasoline direct injection engines, with better fuel economy claimed by GM. Earlier 2010 models had the GM badges on the front doors, but were later deleted.[9]

The second generation Equinox is available standard with a 2.4-liter I4 engine produced in Tonawanda, New York and Spring Hill, Tennessee, with a 3.0-liter V6 engine is available as an option.[10] Both powertrains contain six-speed automatics and optional all-wheel-drive systems, with front-wheel-drive being standard.[11]

The 2015 model year saw the addition of OnStar with 4G LTE and built-in Wi-Fi hotspot, which included a 3GB/three-month data trial, standard on LT and LTZ models, with navigation available on LTZ and 2LT.

For 2016, the Chevrolet Equinox received its first mid-cycle refresh along with its cousin the GMC Terrain, which was unveiled at the 2015 Chicago Auto Show on February 12, 2015. This Equinox received a new grille, headlights and front fascia as well as reworked tail lights. In the interior, the Equinox gained a new gear selector, a second storage shelf underneath the dashboard, as well as deletion of the door lock buttons from the dashboard. A new level trim, L, was introduced as the base level, as LS was made the second level, followed by LT and another new trim Premier (replacing LTZ for 2017). Both LT1, LT2, and LTZ level trims were discontinued. 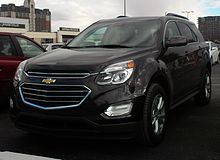 More features are in LTZ and LS trims, while LT is unchanged from 2015. However, the OnStar delete feature was removed along with the CD/AM/FM/MP3/WMA Playback audio system, the rear seat entertainment system and one set of 19-inch chrome wheels. In its place are the Chevrolet MyLink system that became standard on all trims and new 17- and 18-inch wheel trims.[12]

Chevrolet unveiled the third-generation Equinox on September 22, 2016.[22] Gasoline-powered variants of the 2018 Chevrolet Equinox went on sale in early 2017, while diesel-powered variants arrived in autumn 2017. This generation was developed as a smaller vehicle to align itself with other vehicles in the compact crossover SUV segment, with its former role occupied by the new Chevrolet Blazer.[23]

The third-generation Equinox also introduced a new AWD system from GKN Driveline, which allows the driver to disengage the driveshaft to reduce friction and rotational inertia during the times when AWD is not needed.[24]

After the 2019 model year, Chevrolet planned to no longer AWD on the diesel-powered Equinox, due to low consumer demand.[26] However, this change never took place as the diesel engine was discontinued entirely after the 2019 model year.[27] The 2.0-liter LTG turbocharged inline-four was discontinued for the 2021 model year due to low consumer demand as it only represented for around 7 percent of all Equinox sales.[28]

The Equinox was discontinued again in the Mexican market in July 2021 due to poor sales, being indirectly replaced by the Captiva, although it is still produced in Mexico for export markets.[29]

The Midnight trim line went on sale in Mexico in September 2019.[30]

On February 6, 2020, Chevrolet unveiled a refreshed Equinox at the Chicago Auto Show. The updated vehicle sports a new front grille, which extends into the redesigned headlamps, along with a restyled lower fascia with different foglamps. The rear also sees small changes in the way of redesigned taillamps and a different bumper.

The base L trim level was dropped, making the LS trim level the base model.[31] The Midnight, Sport, and Redline editions were also discontinued, all of which were replaced by the new RS trim level.[32][33] The refreshed Equinox went on sale in the first quarter of 2021 as a 2022 model, as there is no demand to launch brand-new redesigned and facelifted vehicles in 2020 as 2021 MY vehicles due to effects from the coronavirus pandemic.[34][35][failed verification]

Holden launched the Holden Equinox (EQ series) in Australia in November 2017, with the first cars arriving in Australia and New Zealand in December. It was available with a 1.5-liter turbocharged engine on the base LS and LS+ models, while the more potent 2.0-liter turbocharged model was available for all other models - LT, LTZ and LTZ-V. The 1.6-liter turbo-diesel engine launched in 2018.[38] It was produced at GM's Ramos Arizpe assembly facility in Mexico, and replaced the Korean-built five-seat Captiva.

The Australasian Equinox was sold alongside the seven-seat Holden Acadia, known as the GMC Acadia in the Americas.[39]

On October 17, 2018, Holden halted orders on the Equinox due to slow sales and unsold inventory at its dealerships.[40] The Holden Equinox was discontinued in 2020, along with the rest of the Holden lineup, following GM's decision to terminate the marque in Australia and New Zealand and withdraw from all right-hand drive markets due to poor sales and adequate investments not being returned for demand and funding needed continue to serve and remain present in right-hand drive markets.[41]

The battery electric version of the Equinox was introduced in January 2022 in a set of artist impression images at the 2022 Consumer Electronics Show (CES) and will go on sale in the fall of 2023 for the 2024 model year. It received a completely separate design and underpinnings to the ICE-powered Equinox.[43] The vehicle will be equipped with GM Ultium batteries shared with other GM battery electric vehicles.[44]

The Chevrolet Equinox Fuel Cell Vehicle uses hydrogen for fuel with water as its only exhaust. The Equinox Fuel Cell uses the fourth-generation hydrogen technology found in the Chevrolet Sequel concept, which was unveiled in September 2009. The fuel cell is designed for only 50,000 miles (80,000 km) of driving, but is engineered to be operable in subfreezing temperatures throughout its life. GM states that the Equinox Fuel Cell is about 500 pounds (230 kg) heavier than the original Equinox and has one inch less ground clearance. To reduce weight, it has aluminum doors and a carbon fiber hood. It uses headlights from the Pontiac Torrent.[citation needed]

A dashboard mounted screen calculates the fuel savings to that of a gasoline-powered Equinox. It also includes a kilowatt meter and a fuel cell energy display. The fuel cell has four vapor outlets that replace the exhaust pipe. Three carbon-fiber fuel tanks store up to a maximum of 9.25 pounds (4.2 kg) of gaseous hydrogen at 10,000 psi (70 MPa), and give the Equinox a range of 200 miles (320 km). The Equinox Fuel Cell is certified by the EPA as a zero-emission vehicle (ZEV). GM built 115 Chevrolet Equinox Fuel Cell vehicles and deployed them in 2007–2008 in several target areas including New York and California as part of a comprehensive plan dubbed "Project Driveway".[45]

The Equinox Fuel Cell includes safety features such as ABS, traction control system, and GM's OnStar telematics service, which offers drivers advice on operating the cars as well as information on nearby hydrogen filling stations. The car meets all 2007 federal safety standards.

Motor Trend assessed the vehicle's performance as nearly the same as the 3.6-liter gasoline-powered equivalent, while bemoaning the dearth of high-pressure hydrogen filling stations near Riverside, California, in 2008.[46]

In 2013, Nat G CNG Solutions and AGA Systems announced that they had begun offering a Compressed Natural Gas (CNG) version of the Chevy Equinox and the GMC Terrain using the 2.4-liter direct-injected engine. The natural gas version is a "bi-fuel" CNG vehicle, meaning that it can run on either gasoline or natural gas, giving it extended range. The Terrain/Equinox were the first direct-injection natural gas vehicles ever approved by the US EPA.[47]

The CNG version was available as a newly purchased Equinox through select dealers or as a retrofit on 2013 and 2014 models. Nat G CNG Solutions offered the vehicle in two options: a two-seater "cargo version" and a five-seat "passenger version." The cargo version has an 837-mile combined gasoline / natural gas (9.2 gge of CNG) while the passenger version has a 775-mile combined highway range (6.8 gge of CNG).

The companies claimed that the natural gas version had tested at the EPA lab at 31 mpg‑US (7.6 L/100 km; 37 mpg‑imp) highway on natural gas and had achieved a Bin 3 emissions equivalent to the Toyota Prius.[47]

Amp Electric Vehicles sells an all-electric conversion of the Chevrolet Equinox. They have sold their first electric Equinox to Dayton Power & Light, and had a five-year, thousand-SUV order from Northern Lights Energy in Iceland.