Launched in July 1993 and sold until April 1995,[3] the VR series came with an updated, sleeker and more modern design, as well as safety enhancements such as anti-lock brakes (ABS). It launched shortly before the Ford ED Falcon. From the side, the biggest change was the revised daylight opening around the C-pillar and the use of a round rear wheelarch, instead of a squared-off shape used on the previous VN and VP model Commodores. A Series II model launched in September 1994. The VR Acclaim and Calais included a driver's side Supplemental Restraint System (SRS)[4] airbag as standard, which was a first for an Australian car. They also had standard ABS brakes and independent rear suspension (IRS). The airbag, ABS brakes and IRS were also available across the range for both automatic transmission and manual transmission models. The rear-end treatment saw raised tail lamps, which were recessed high up on the boot lid for safety reasons. A new electronic version of the Turbo-Hydramatic 700R4 (TH700) automatic transmission was introduced, known as the GM 4L60-E. The VR Commodore was Wheels Car of the Year for 1993.

Commodore Executive opened up the VR lineup, although it was primarily projected at fleet customers. Power steering, electric side mirrors and four-wheel disc brakes were standard, with automatic transmission optional.

Only one limited edition model was offered in the VR range:

With the introduction of the VR Commodore, Holden added the Acclaim model to the Commodore range. Sitting one notch above the Executive, the Acclaim was based on an automatic transmission Executive with a safety pack that was aimed at families and featured ABS brakes, IRS, driver's side airbag and cruise control as standard.

The Commodore S was a sports option based on the Executive, retaining its 3.8-litre engine. 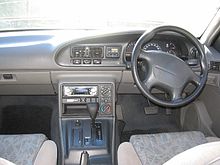 Interior of an SS

The Berlina [5] was the first of the luxury-oriented variants. Alloy wheels, electric windows and automatic transmission were standard fitment. Sedan and wagon variants were offered.[5]

The Calais topped the VR lineup with an automatic transmission, driver's airbag, IRS, and ABS as standard, as well as features, such as climate control and velour trim or optional leather, to differentiate it from the lesser Commodore models.

A coupe utility variant of the VR Commodore was offered in Holden Ute and the Holden 'S’ Ute models.[1] Unlike the Ute which carried no external model badging, the 'S’ Ute was fitted with "Commodore" badges.[1]

Holden also produced longer wheelbase variants of the Commodore VR as the Holden Statesman (VR) and the Holden Caprice (VR).

Holden's performance vehicle partner Holden Special Vehicles produced the following range of Holden VR based models, which were each marketed under the HSV brand.

The VR series Maloo utility was introduced in August 1993 with new front sheetmetal and a reworked interior appearance. The 5.0-litre V8 engine was upgraded slightly to 185 kW (248 hp). 156 examples were produced.[7]

In 1993, the significantly redesigned VR Senator was released. The rear seating was from the Holden Statesman. Along with the rest of the HSV range, the Senator bodykit was penned by designer Ian Callum to produce a sleeker, more aggressive stance along with a 185 kW (248 hp) version of the 5.0-litre V8. A new suspension setup was developed, known as the touring package which aimed to provide capable handling and a smooth ride. Additionally from May 1994 onwards, the Senator could be optioned with HSV's new 215 kW (288 hp) 5.7-litre "stroker" V8 known as the "215i". The $10,000 "stroker" engine option was handbuilt as an upgrade over the standard V8. This engine could be coupled to either the four-speed automatic transmission or a six-speed manual transmission.[8] 0–100 km/h (0-60 mph) takes 7.8 sec for the 185i and takes 7.3 sec for the 215i. Total number built for both versions was 855.[9]

The United Australian Automobile Industries (UAAI) joint venture agreement with Toyota Australia first starting with the VN Commodore continued with the VP and VR. The VR Lexcen equivalent was known as the T3 series, and was introduced at or about the same time as the other VR models; featuring subtle styling differences, particularly, the front panels. While the VR badged as a Holden was either first or second in the monthly Australian automotive sales, the Toyota Lexcen sold substantially fewer, as there was an interpretation of the Toyota Lexcen as Japan returning to its copycat roots. This was due to Toyota specifying styling that was in common with the then new "wide body" Camry, while retaining the original Commodore bodywork and interiors. Lexcen sales were still quite low, also another factor in this is Holden restricted Toyota in the number of Lexcens it was to provide to them. The number of technical service bulletins, recalls and customer service exercises on Holden-supplied Lexcens exceeds typical Toyota exercises on Toyota built vehicles in the era by more than five to one.