The Homebush Street Circuit, also known as the Sydney Olympic Park Street Circuit, was a 3.420 km (2.125 mi) temporary street circuit around the former Olympic precinct at Sydney Olympic Park, Homebush Bay, Australia. The track hosted the Sydney 500 and was used for the first time at the final round of the 2009 V8 Supercar Championship Series.[1] The circuit was used for the final time in December 2016 due to a relocation to a Newcastle after it was announced the ANZ stadium precinct would be upgraded and block the track location. 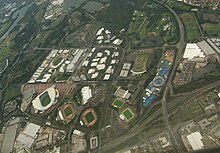 As of 4 December 2016, the official race lap records at Homebush Street Circuit are listed as:[9]