Skip to content
American car with a large engine modified for linear speed
For other uses, see Hot rod (disambiguation). 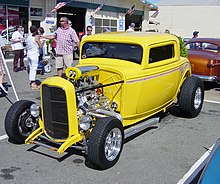 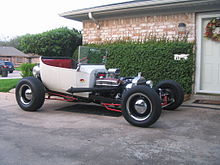 T-bucket with early hemi, but aluminum radiator (rather than brass), rectangular headlights, and five-spokes (rather than motorcycle wheels) mark this as a later incarnation.

Hot rods are typically American cars that might be old, classic, or modern and that have been rebuilt or modified with large engines optimised for speed and acceleration.[2] One definition is: "a car that's been stripped down, souped up and made to go much faster."[3] However, there is no definition of the term that is universally accepted and the term is attached to a wide range of vehicles.[4] Most often they are individually designed and constructed using components from many makes of old or new cars, and are most prevalent in the United States and Canada.[4] Many are intended for exhibition rather than for racing or everyday driving.[4]

The origin of the term "hot rod" is unclear. For example, some say that the term "hot" refers to the vehicle's being stolen. Other origin stories include replacing the engine's camshaft or "rod" with a higher performance version. According to the Hot Rod Industry Alliance (HRIA) the term changes in meaning over the years, but "hot rodding has less to do with the vehicle and more to do with an attitude and lifestyle."[5] For example, hot rods were favorites for greasers.

The term has broadened to apply to other items that are modified for a particular purpose, such as "hot-rodded amplifier".

There are various theories about the origin of the term "hot rod". The common theme is that "hot" related to "hotting up" a car, which means modifying it for greater performance. One theory is that "rod" means roadster,[6] a lightweight 2-door car which was often used as the basis for early hot rods. Another theory is that "rod" refers to camshaft,[7] a part of the engine which was often upgraded in order to increase power output.

In the early days, a car modified for increased performance was called a "gow job". This term morphed into the hot rod in the early to middle 1950s.[8]

The term "hot rod" has had various uses in relation to performance cars. For example, the Ontario Ministry of the Environment in its vehicle emissions regulations refers to a hot rod as any motorized vehicle that has a replacement engine differing from the factory original.[9]

The predecessors to the hotrod were the modified cars used in the Prohibition era by bootleggers to evade revenue agents and other law enforcement.[7]

Hot rods first appeared in the late 1930s in southern California, where people raced modified cars on dry lake beds northeast of Los Angeles, under the rules of the Southern California Timing Association (SCTA), among other groups. This gained popularity after World War II, particularly in California, because many returning soldiers had received technical training.[7][6] The first hot rods were old cars (most often Fords, typically 1910s-1920s Model Ts, 1928–31 Model As, or 1932-34 Model Bs), modified to reduce weight. Engine swaps often involved fitting the Ford flathead V8 engine (known as the "flatty") into a different car, for example, the common practice[citation needed] in the 1940s of installing the "60 horse" version into a Jeep chassis.

Typical modifications were removal of convertible tops, hoods, bumpers, windshields, and/or fenders; channeling the body; and modifying the engine by tuning and/or replacing with a more powerful type. Wheels and tires were changed for improved traction and handling. Hot rods built before 1945 commonly used '35 Ford wire-spoke wheels.[10] 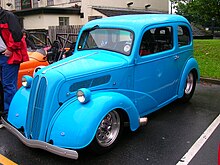 After World War II, many small military airports throughout the country were either abandoned or rarely used, allowing hot rodders across the country to race on marked courses. Originally, drag racing had tracks as long as 1 mi (1.6 km) or more, and included up to four lanes of racing simultaneously. As some hot rodders also raced on the street, a need arose for an organization to promote safety, and to provide venues for safe racing. The National Hot Rod Association was founded in 1951, to take drag racing off the streets and into controlled environments.[11]

In the '50s and '60s, the Ford flathead V8 was supplanted by the Chrysler FirePower engine (known as the "early hemi"). Many hot rods would upgrade the brakes from mechanical to hydraulic ("juice") and headlights from bulb to sealed-beam.[12] A typical mid-1950s to early 1960s custom Deuce was fenderless and steeply chopped, powered by a Ford or Mercury flathead,[13] with an Edelbrock intake manifold, Harman and Collins magneto, and Halibrand quick-change differential.[14] Front suspension hairpins were adapted from sprint cars, such as the Kurtis Krafts.[15]

As hot rodding became more popular, magazines and associations catering to hot rodders were started, such as the magazine Hot Rod, founded in 1948.[16]

As automobiles offered by the major automakers began increasing performance, the lure of hot rods began to wane.[7] With the advent of the muscle car, it was now possible to purchase a high-performance car straight from the showroom.[6]

However, the 1973 Oil Crisis caused car manufacturers to focus on fuel efficiency over performance, which led to a resurgence of interest in hot rodding.[7] As the focus shifted away from racing, the modified cars became known as "street rods". The National Street Rod Association (NSRA) was formed and began hosting events.

By the 1970s, the 350 cu in (5.7 l) small-block Chevy V8 was the most common choice of engine for hot rods.[17][18] Another popular engine choice is the Ford Windsor engine.[19] During the 1980s, many car manufacturers were reducing the displacements of their engines, thus making it harder for hot rod builders to obtain large displacement engines. Instead, engine builders had to modify the smaller engines (such as using non-standard crankshafts and pistons) to obtain larger displacement. While current production V8s tended to be the most frequent candidates, this also applied to others. In the mid-1980s, as stock engine sizes diminished, rodders discovered the 215 cu in (3.5 L) aluminum-block Buick or Oldsmobile V8 could be modified for substantially greater displacement, with mainly wrecking yard parts.[20] This trend was not limited to American cars; Volkswagen enthusiasts similarly stretched stock 1600cc engines to over two liters.[21]

There is still a vibrant hot rod culture worldwide, especially in Canada, the United States, the United Kingdom, Australia and Sweden.[citation needed] The hot rod community has now been subdivided into two main groups: street rodders and hot rodders.[22][23][24]

Author Tom Wolfe was one of the first to recognize the importance of hot rodding in popular culture and brought it to mainstream attention in his book The Kandy-Kolored Tangerine-Flake Streamline Baby.[citation needed]

There are magazines that feature traditional hot rods, including Hot Rod, Car Craft, Rod and Custom, and Popular Hot Rodding. There are also television shows such as My Classic Car, Horsepower TV, American Hot Rod, Fast and Loud, and Chop Cut Rebuild.

Particularly during the early 1960s, a genre of "hot rod music" rose to mainstream popularity. Hot rod music was largely a product of a number of surf music groups running out of ideas for new surfing songs and simultaneously shifting their lyrical focus toward hot rods. Hot rod music would prove to be the second phase in a progression known as the California Sound, which would mature into more complex topics as the decade passed. Hot rods were used as the theme of Lightning Rod, a Rocky Mountain Construction roller coaster at Dollywood.

In Sweden and Finland

Locals in these countries, influenced by American culture, have created a local hot rod culture which is vibrant in Sweden and Finland where enthusiasts gather at meetings such as Power Big Meet and clubs like Wheels and Wings in Varberg, Sweden have established themselves in Hot Rod culture. Since there is very little "vintage tin" the hot rods in Sweden are generally made with a home made chassis (usually a Model T or A replica), with a Jaguar (or Volvo 240) rear axle, a small-block V8, and fiberglass tub, but some have been built using for instance a Volvo Duett chassis. Because the Swedish regulations required a crash test even for custom-built passenger cars between 1969 and 1982, the Duett option was preferred, since it was considered a rebodied Duett rather than a new vehicle.[25][26][27][28] Some 1950s and 1960s cars are also hot rodded, like Morris Minor, Ford Anglia, Volvo Amazon, Ford Cortina, '57 Chevy, to name but a few. These are known as custom cars (sometimes spelled Kustom).

Some terms have an additional, different meaning among customizers than among rodders: NOS, for instance, is a reference to new old stock, rather than nitrous oxide.