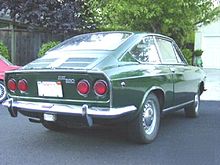 A Kammback—also known as a Kamm tail or K-tail—is an automotive styling feature wherein the rear of the car slopes downwards before being abruptly cut off with a vertical or near-vertical surface. A Kammback improves aerodynamic drag, thus improving efficiency and fuel consumption,[1] while maintaining a practical shape for a vehicle.

The Kammback is named after German aerodynamicist Wunibald Kamm for his work developing the design in the 1930s.

Some vehicles incorporate the kammback design based on aerodynamic principles, while some use a cut-off tail as a design or marketing feature. 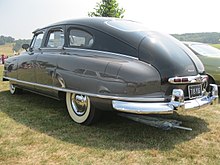 As the speed of cars increased during the 1920s and 1930s, designers observed and began to apply the principles of automotive aerodynamics.[2] As aerodynamic drag increases, more energy, and thus more fuel, are required to advance a vehicle.[3]

In 1922, Paul Jaray patented a car based on a teardrop profile (i.e. with a rounded nose and long, tapered tail) to minimize the aerodynamic drag that is created at higher speeds.[4][5] The streamliner vehicles of the mid 1930s—such as the Tatra 77, Chrysler Airflow and Lincoln-Zephyr—were designed according to these discoveries.

However, the long tail was not a practical shape for a car, so automotive designers sought other solutions. In 1935, German aircraft designer Georg Hans Madelung showed alternatives to minimize drag without a long tail.[6] In 1936, a similar theory was applied to cars after Baron Reinhard Koenig-Fachsenfeld developed a smooth roofline shape with an abrupt end at a vertical surface, effective in achieving low amounts of drag similar to a streamlined body.[5][7][8] He worked on an aerodynamic design for a bus, and Koenig-Fachsenfeld patented the idea.[9] Koenig-Fachsenfeld worked with Wunibald Kamm at Stuttgart University, investigating vehicle shapes to "provide a good compromise between everyday utility (e.g. vehicle length and interior dimensions) and an attractive drag coefficient".[5][7] In addition to aerodynamic efficiency, Kamm emphasized vehicle stability in his design,[7] mathematically and empirically proving the effectiveness of the design.[10]

In 1938, Kamm produced a prototype using a Kammback shape, based on a BMW 328.[11] The Kammback, along with other aerodynamic modifications, gave the prototype a drag coefficient of 0.25.[12]

The ideal shape to minimize drag is a "teardrop," a smooth airfoil-like shape, but it is not practical for road vehicles because of size constraints.[1] However, researchers, including Kamm, found that abruptly cutting off the tail resulted in a minimal increase in drag.[5] The reason for this is that a turbulent wake region forms behind the vertical surface at the rear of the car. This wake region mimics the effect of the tapered tail in that air in the free stream does not enter this region (avoiding boundary layer separation); therefore, smooth airflow is maintained, minimizing drag.[11]

Kamm's design is based on the tail being truncated at the point where the cross section area is 50% of the car's maximum cross-section,[5][13] which Kamm found represented a good compromise, as by that point the turbulence typical of flat-back vehicles had been mostly eliminated at typical speeds.

The Kammback presented a partial solution to the problem of aerodynamic lift, which was becoming severe as sports car racing speeds increased during the 1950s. The design paradigm of sloping the tail to reduce drag was carried to an extreme on cars such as the Cunningham C-5R,[14] resulting in an airfoil effect lifting the rear of the car at speed and so running the risk of instability or loss of control. The Kammback decreased the area of the lifting surface while creating a low-pressure zone underneath the tail.

Some studies showed that the addition of a rear spoiler to a Kammback design was not beneficial because the overall drag increased with the angles that were studied.[1]

In 1959, the Kammback came into use on full-body racing cars as an anti-lift measure, and within a few years would be used on virtually all such vehicles. The design had a resurgence in the early 2000s as a method to reduce fuel consumption in hybrid electric vehicles.

Some models that are marketed as "coupes"—such as BMW and Mercedes-Benz SUVs like the X6 and GLC Coupé—"use a sort-of Kammback shape, though their tail ends have a few more lumps and bumps than a proper Kammback ought to have."[25]

Cars that have had a Kammback include: