Skip to content
Customized car with a lowered body
This article is about the car. For the song, see Low Rider. For other uses, see Lowrider (disambiguation).

1964 Chevrolet Impala named "Gypsy Rose," owned by Jesse Valadez, on display in the Petersen Automotive Museum.[1] It is considered to be one of the most iconic lowriders ever built.[2]

A lowrider or low rider is a customized car with a lowered body that emerged among Mexican American youth in the 1940s.[3] Lowrider also refers to the driver of the car and their participation in lowrider car clubs, which remain a part of Chicano culture and have since expanded internationally.[3][4] These customized vehicles are also artworks, generally being painted with intricate, colorful designs, unique aesthetic features, and rolling on wire-spoke wheels with whitewall tires.[3][5]

Lowrider rims are generally smaller than the original wheels.[6] They are often fitted with hydraulic systems that allow height adjustable suspension, allowing the car to be lowered or raised by switch.[7] This was developed by Ron Aguirre after lowriding was made illegal in California, who did so after being targeted for tickets by police in Rialto in 1959.[7] Lowriding bans were overturned in the state in 2022, acknowledged as discriminatory toward Chicano culture and Latinos.[5]

The lowrider car serves no practical purpose beyond that of a standard car. Lowrider car culture began in Los Angeles, California, in the mid-to-late 1940s and during the post-war prosperity of the 1950s. Initially, some Mexican-American youths lowered blocks, cut spring coils, z'ed the frames[clarification needed] and dropped spindles. The aim of the lowriders is to cruise as slowly as possible, "Low and Slow" being their motto. By redesigning these cars in ways that go against their intended purposes and in painting their cars so that they reflect and hold meanings from Mexican-American culture, lowriders create cultural and political statements that go against the more prevalent Anglo culture.[3]

Lowrider culture and society public conference in San Jose, California (2019). The city was among the first to repeal its ban on lowriding in 2022.[8]

The rise in popularity resulted in a backlash: the enactment of Section 24008 of the California Vehicle Code on January 1, 1958, which made it illegal to operate any car modified so that any part was lower than the bottoms of its wheel rims. In 1959, mechanic Ron Aguirre found a way to bypass the law by installing hydraulics that could raise and lower a General Motors X-frame chassis by flipping a switch.[9]

Lowriding became popular in the 1980s and 1990s,[10] and then regained popularity a little in 2009, then significantly during the COVID-19 pandemic in the United States.[11] In the 2020s, activists argued that the practice was harmless and banning it was simply the result of prejudice against Mexican-Americans. Bans were enacted in San Jose in 1986 and Sacramento in 1988,[10] but repealed in 2022.[8] In 2022, the State Assembly unanimously passed a resolution urging all remaining cities with bans (including National City, which banned it in 1992) to repeal them.[12] 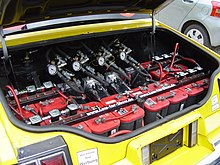 Hydraulic suspension system in the trunk of an Oldsmobile, running 12 batteries and 4 hydraulic pumps. This system is set up for frequent hopping, whereas a lowrider designed for cruising typically uses fewer batteries and pumps
Main article: Height adjustable suspension

In 1959, a customizer named Ron Aguirre developed a way of bypassing the law with the use of hydraulic Pesco pumps and valves that allowed him to change ride height at the flick of a switch.[13] Ron Aguirre developed this modification with help from his father, after conceiving of the idea.[7] Aguirre's motivation was to stop being targeted with traffic tickets, as he had been by local police in his city of Rialto, California after the statewide ban was enacted.[7]

Role of the Chevrolet Impala

The preceding year, 1958, saw the emergence of the Chevrolet Impala, which featured an X-shaped frame that was perfectly suited for lowering and modification with hydraulics.[13] On this car, the standard perimeter-type frame was abandoned, replaced by a unit with rails laid out in the form of an elongated "X." Chevrolet claimed that the new frame offered increased torsional rigidity and allowed for a lower placement of the passenger compartment. This was a transitional step between traditional perimeter frame construction and the later fully unitized body/chassis, the body structure was strengthened in the rocker panels and firewall. This frame was not as effective in protecting the interior structure in a side impact crash, as a traditional perimeter frame.[14]

Between 1960 and 1975, customizers adapted and refined GM X-frames, hydraulics, and airbrushing techniques to create the modern lowrider style.[15] Lowriding grew alongside the Chicano Movement in the 1960s and 1970s.[5]

At first, lowriders were only seen in places such as Los Angeles, especially in the 1970s on Whittier Boulevard when lowriding came to its peak. Whittier was a wide commercial street that cut through the barrio of the city in Los Angeles, California. Throughout the 1970s that culture spread throughout the Central Valley and San Jose areas of California, helped by release of the R&B song “Low Rider” by War, and creation of low riding clubs such as Carnales Unidos in 1975,[16] and further expanded with the publishing of Low Rider magazine by San Jose State students in 1977.[17] At its peak in 1988, Low Rider magazine had monthly sales of over 60,000 copies. Lowriders were featured in the 1979 film Boulevard Nights, which some blamed for associating lowrider culture with street gangs.

Today, the lowriding scene is diverse with many different participating cultures, vehicle makes, and visual styles. The city of Española, New Mexico became a hotspot for lowriders outside of California.[4]

Junichi Shimordaira continues to import and sell these cars through his business, Paradise Road.[21] The spread of lowrider culture and the fame of Paradise Road even attracted the attention of Ed Roth, who is famous for creating custom cars such as hot rods and a prominent figure in Kustom Kulture.[22] Since the introduction of lowriders in Japan and the rise of lowriders in Japan in 2001, it is estimated that there are still 200 car clubs that are related to the lowrider scene that are still active to this day.[23]