Mallala is a locality in the Australian state of South Australia about 58 kilometres (36 mi) north of the state capital of Adelaide. The name is thought to be derived from the Kaurna word madlala[6] or madlola, meaning "place of the ground frog".[7][8] At the 2016 census, the locality had a population of 894 of which 733 lived in its town centre.[9][10]

The word 'Mallala' is derived from the Aboriginal 'Madlola' – a place of the ground frog according to South Australian historian Geoffrey Manning.[11][12]

Mallala is located within the traditional lands of the Kaurna people.[13]

The first land taken up in the district was in 1851 by Phillip Butler, under occupational licence. The Butler property was called 'Mallala Station', and the town of Mallala developed in the vicinity. The large runs of the pastoralists were cut up into smaller holdings, which sold for £1 per acre to new settlers, and created a continuous series of small farms.[12]

The present township lies midway between the hills and the sea, fifty-eight kilometres north of Adelaide. An impressive War Memorial stands at the hub of an eight-road intersection in the centre of the town.[12]

A now departed industry was the East Brothers Machinery works, who for over a century manufactured farm equipment which was sold widely across Australia. The town once had a very impressive flour mill where the townsfolk used to grind the locally produced wheat, but the building fell into disuse as the industry centralised. Today the mill is used as a museum for the local historical committee.[12] 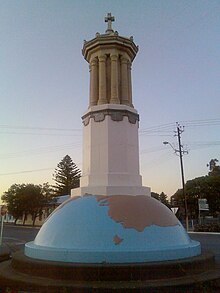 At Mallala's centre is a World War I war memorial in the centre of the intersection of eight roads. Its insignia reads: 'In honour of ten men who died in defence of home and liberty' in memory of ten local men who were killed in Egypt, France and Palestine.[8] The memorial consists of a base made of ten granite stones in each step of the base topped with ten arched stones to form a hemisphere showing a map of Australia. The hemisphere supports a ten-sided column the names of the ten soldiers which is topped by ten marble pillars and a plinth displaying the Cross of Sacrifice. The history of the ten soldiers and the broader service history of the district forms a major collection at the Mallala Museum.

In 1939 the Royal Australian Air Force established a base called RAAF Base Mallala to the north of the Mallala township. The base was originally used for advanced training for RAAF pilots. The base was subsequently closed in May 1960 and the land was sold at auction in early 1961.[17] Later that year the then 3.38 km (2.1 mi) Mallala Race Circuit opened on 19 August 1961, and less than two months later was the chosen site for the 1961 Australian Grand Prix. The circuit, now totalling 2.601 km (1.616 mi), has also hosted rounds of the Australian Touring Car Championship, the V8 Supercar Development Series as well as the Australian Drivers' Championship. Mallala Motor Sport Park, as the circuit is now known, is also used by the South Australian Police for driver training and assessment, and hosts the Historic Mallala event, held in April each year.

The international standard equestrian centre east of the township is the venue for national show jumping and related event competitions.[18]